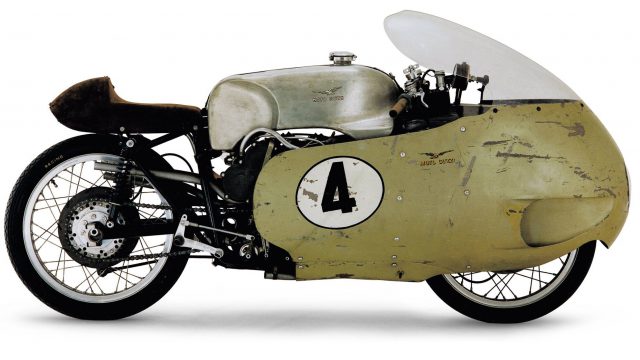 Moto Guzzi V8 was well ahead of its time. With its astonishing power-to-weight ratio it was able to reach 172 mph (280 kph) in the 50s. The same speed was reached again at the Grand Prix motorcycle race 20 years later. That's why we put it on our "five motorcycles that shook the world" list.

We're going to start a mini-series about five bikes that shook the motorcycle world. Bikes that were ahead of their time when they were produced.

The first bike in our series is the 1955 Moto Guzzi V8 Grand Prix. Also known as The Otto Cilindri, or simply "The Otto", this special motorcycle was designed by Giulio Cesare Carcano for the Moto Guzzi GP racing team for the 1955 – 1957 seasons.

Even if it wasn't the world's first V8 motorcycle (the Italian manufacturer Galbusera built in 1938 had a V8 two-stroke eight-cylinder engine) this was a revolutionary one. The engine was a liquid cooled, DOHC, 499cc V8 with eight Dell'Orto carburetors. It was capable of 78 horsepower at an astonishing 12.000 rpm. Also, the dry weight of the motorcycle was very low, even compared to today's standards: only 148 kilograms. The high power and the low weight were the main advantages of this motorcycle.

The engine itself was weighing 45 kilograms, and the pilot could choose from a 4, 5 or 6 gears transmission, depending on his preferences.

This motorcycle could reach a top speed of 280 km/h (172 mph) due to its aerodynamic bullet-shaped race fairing. The same speed was reached again at the Grand Pix motorcycle race 20 years later. It was something outrageous on those days. The motorcycle was held back by the tires, brakes and suspension technology of the time, which were making the track testing very dangerous.

As you would expect, the engine production process had its downsides. It was expensive to build and maintain because of its broken crankshafts, overheating and seizing. Think of the fact that the mechanics were supposed to do a watchmaker's job in order to dismantle the tiny V8 engine. It was so dangerous that, in 1957 there were two bikes available and no race pilot was willing to race the bike without further improvements. And for good reason! Think about the results of a broken crankshaft at 200 km/h. Sadly, "The Otto" remained undeveloped because Moto Guzzi withdrew from the racing scene in 1957.

Even though it never won a single Grand Prix, this bike wrote an important file in the motorcycle racing history. You can still admire two authentic examples of this awesome piece of machinery at the Moto Guzzi Museum in Mandello, Italy.

See other bikes from our Five motorcycles that shook the world list: