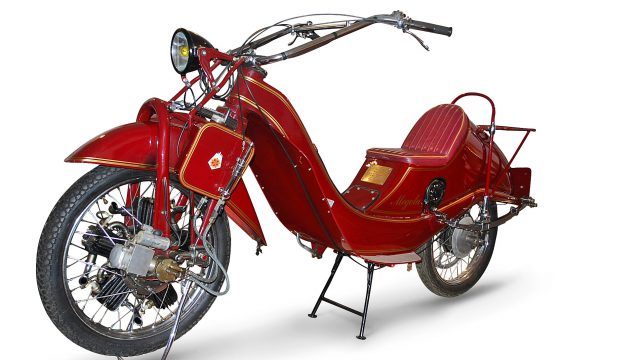 In over 100 years of history, motorcycles have gone through many iterations to reach the modern form we can admire on the streets today. During this long process, some less than ordinary motorcycles (in terms of shape or mode of operation) have come to life.

Today we'll start a series of five articles in which we'll present five motorcycles that are out-of-the-ordinary according to today’s standards.

The first bike in our list is Megola. This violin-shaped motorbike was produced between 1921 and 1925 in Munich, with the name inspired by its designers: Meixner, Cockerell, and Landgraf.

One of the main features of Megola, besides the visual design, is the engine: it uses a rotary unit (similar to some engines found in airplanes of the time) located inside the front wheel. Yes, it is front-wheel drive! No chains, no belts, no drive shafts. The Megola’s power plant is a 640-cc five-cylinder unit, with each cylinder having a displacement of 128-cc and the valves mounted sideways.

To get an idea about how the rotary engine works, the cylinders rotate around the front axle at a speed six times greater than the speed of the wheel. Therefore, when the engine is running at 3,600 rpm, the wheel rotates at only 600 rpm.

The power was modest, about 14 horsepower, but the advantage was that the engine was attached directly to the wheel axle, with this feature giving it a lower center of gravity and higher maneuverability.

The design process for this motorcycle was a very ingenious one. The cylinders could be dismantled without the need for the wheel to be stripped, making service operations a breeze. And in the event of a flat tire, you did not have to take the wheel off to change the tube. The tube was shaped like a sausage and had two ends, but a continuous shape like a donut.

As a downside, the Megola wasn't equipped with a clutch or a transmission system. Starting it required a person to either spin the front wheel while the bike was suspended on its stand or push-start it. The frame contained a main fuel tank, which fed a smaller fuel tank located on the right side of the front suspension using the gravity.

Almost 2,000 units rolled off the factory gates, and only 10 of them are currently in operation.You can see this marvelous motorcycle at the Guggenheim Museum’s “Art of Motorcycle” display in New York City.