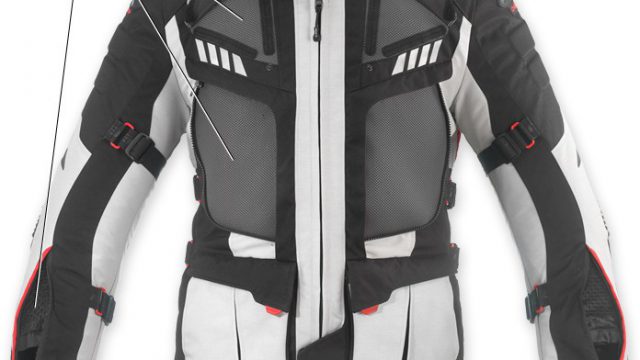 First trip using Clover Crossover 3 jacket and GT-Pro 2 pants. It’s mid-summer, and I was lucky enough to have no rain ahead, so I managed to test only the summer component of the four-season technical jacket. So far, it’s all I wished for.

After more than 60,000 km wearing a Dainese D-Explorer top of the range touring suit, it was time to try something different. I didn’t want to spend a fortune on a Klim textile jacket but neither to go out in the wild using some cheap gear. More than that, I was looking for a light and heavy-ventilated gear. It’s more important to me to have a light gear and to put a wind-stopper on when it’s cold outside than to sweat in the hot summer days. So it had to be a four-season, technical, touring motorcycle gear.

I had three different items to choose from: Dakar, Scout, and Crossover. The Dakar was better-ventilated, the Scout was less ventilated, while the Crossover was more versatile and fitted me better. So, it had to be this one. The price – Crossover 3 Jacket: EUR 569. GT-Pro-2 Pants: EUR 309.

The next day, I was struggling to get out of the city traffic on a huge Triumph Tiger Explorer. It was so hot that the asphalt was melting. And I had my back-shield on. There’s no ventilation on your back if wearing a shield. I won’t lie to you. It was hot as hell even in this ventilated suit. However, it felt light, unlike my old Dainese which was a kind of medieval armor compared to this one.

It all started to work when I hit the highway. Even with that huge wind-screen I felt the ventilation on the upper part of the chest, and on my hands. The jacket comes with seven ventilation openings. Still, the best part here comes from the pants. Besides the classical upper knee ventilation, there’s an under-knee ventilation – very efficient on the adventure-touring motorcycles.

The jacket is not fitted with back-shield as standard. You must buy it separately. Also, an Airbag system can be fitted as an option. Not interested in buying one yet.

What I liked the most, besides the ventialtion, was the way it fits me. The Italians just know how to make a good looking jacket that fits your body without feeling like riding in a corn bag.

The Rain Mode. Here’s the biggest advantage that Clover Crossover 3 has. The inner waterproof and breathable membrane is designed to be worn also on top of the external jacket, which remains completely dry, joining the advantages of a laminated jacket. This version also offers the advantage of increasing the thermal insulation (by creating a thicker air gap inside, which warms up with the body heat). But I didn’t have to put this laminated jacket on, so I can’t tell you how it feels.

After three mid-summer days using the Crossover 3 jacket and GT-Pro pants, I must say that I didn’t find anything to dislike. Maybe some lack of attention at the finish here and there. It’s a great, bang for the buck product.