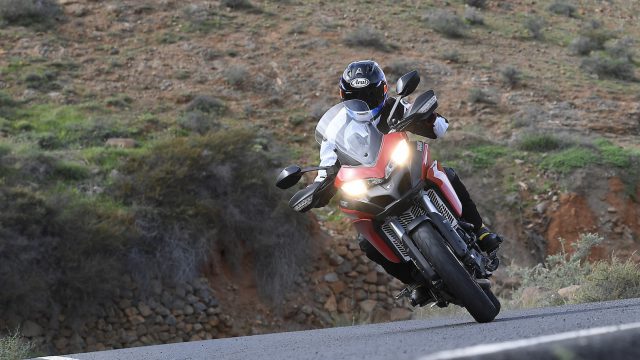 Alan Cathcart was invited at the first test of Ducati’s new junior version of the Multistrada go-anywhere sports tourer, the first downsized version of the best-selling family since 2010. Here are ten important things we learned from his experience with the 950.

1. New-for-2015 937cc version shared with Hypermotard of the Testastretta 11º desmo V-twin motor produces 113 bhp at 9,000 rpm, but with wide spread of power.  The oil system was redesigned and it features new desmodromic cylinder heads with revised porting which deliver a compression ratio reduced to 12.6:1 from 13.1:1, smaller 53mm cylindrical (not elliptical) throttle bodies, and a Bosch ECU with revamped fuelling in each of the four riding modes delivered by the RBW digital throttle.

2. Torque spread is even broader, peaking with 96.2 Nm at 7.750 rpm, but with 80% of that figure delivered between 3,000 and 9,500 rpm, with revlimiter at 10,500 revs. So torquey is this motor that you can accelerate wide open in top gear from 3,000 rpm upwards without a hint of transmission snatch, en route to the 100mph/160kmh mark at 6,800 rpm. This is an extremely flexible friend of a desmo sportbike – and one that sounds pretty nice, too, with a punchy-sounding V-twin echo from that flat-sided silencer.

4. Fully adjustable KYB suspension gives same 170mm wheel travel front and rear, with same 48mm KYB fork as Enduro variant, but direct action shock has no progressive link.  The suspension is set on the soft side as standard, though, and there is some front end dive when you lean hard on the brakes – nothing that a couple of clicks of added compression damping couldn’t make bearable, without sacrificing the bike’s excellent ride quality.

6. 19-inch front wheel gives offroad capability via optional wire wheels, with twin-sided swingarm shared with Enduro replacing Multistrada 1200’s trademark single-sided item. The 19-inch wheel gives lighter if slightly slower steering than the 1200’s 17-incher, which isn’t at all such a bad thing in terms of all-round stability, with the leverage from that wide handlebar ever ready to come into play.

10. Ducati introduces something much more than ‘just’ a smaller-engined Multistrada – this 950 version is a standalone real world motorcycle done right.