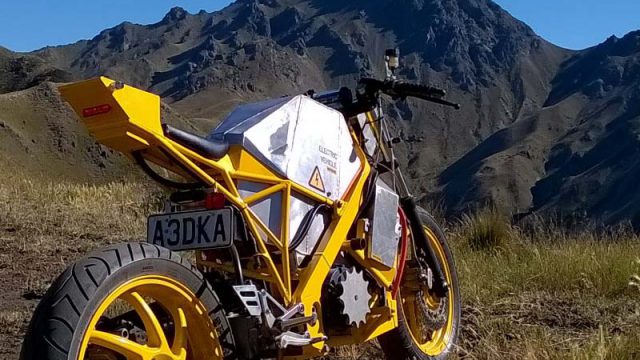 Here on DriveMag, you can check some of the neatest motorcycle builds. Continuing our StreetFighter series, today I'm going to show you a build that's different. I’m willing to bet this is something new for most of us.

I’ll start by saying that electric vehicles are not everyone’s cup of tea, but being a different kind of streetfighter it deserves a well-lighted spot on this scene. This ambitious project began as a 1987 VFR400 NC24 and most of the parts were built and brought together by CustomFighter member henry from New Zealand. henry is a qualified industrial designer, and he is currently studying CAD design, so most of the parts were the result of his work.

The plan for this bike when the building process began was to convert the VFR to full electric and add new subframe, new lights, new 'tank'. A stressed subframe was attached to the main frame to hold the battery box.

Regarding the power plant, henry picked an AC15 motor, Winston 60aH batteries (24), and a Curtis 550A controller. Also, this motorcycle has a regen system as the AC15 is an AC motor.

On the aesthetics side, the frame and wheels were painted in yellow and the aluminum body panels were kept in their natural color state. This paint scheme somehow resembles an industrial machine, such as CAT bulldozers. It inspires powers and reliability. Well played, henry!

As you may observe in the photo gallery and in the 60-page long build thread, the project went through countless iterations regarding the custom fabricated parts. It's not easy to create something from the ground up. You build something, for the moment you’re happy with the result, and then you re-think the whole scheme only to realize that you’ll need to redo some of the parts.

A project of this size and complexity requires time. The build thread started in 2013, and it’s still being refined as you read this. It’s the kind of never-ending project, just like most of the streetfighters you see on the street. But that's part of the streetfighter game. And we flippin' love it!