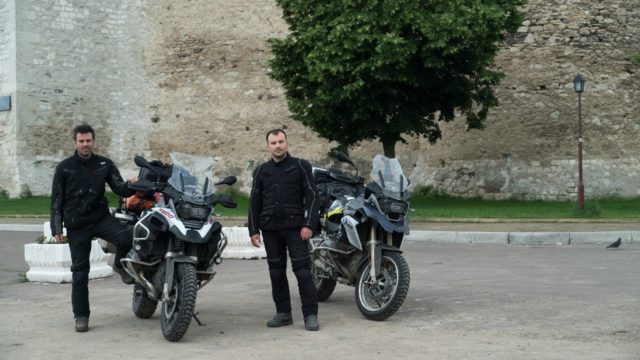 This is the beginning of our Great Caucasus Adventure. First stop: Moldova

Moldova was the first country in our adventure tour. We thought it would be easy. No mountains, no off-road, not too far away. But we were wrong. Watch the movie below.

1st of July, 2 p.m., Bucharest, Romania. We met at a gas station to have a coffee and a sandwich. Our bikes were fully loaded with bad weather clothes, camping gear and film equipment: a couple of Go Pro Cameras, a film camera and… a drone. Not the usual gear when going to the, so called Adventure Motorcycling Zone.

We had four destinations on our route: Moldova, Bulgaria, Georgia, Turkey. Our mission: a short film for each country. Three weeks. 8.500 km [5.281 miles].

It was a sunny day, and everything was just fine. No problems. Not a single issue. Those 356 kilometers [221 miles] to the Moldavian border acted as a perfect warm-up. We reached Chisinau – Capital of Moldova in the evening.

I was touched by the way the Moldavian villages disappeared in the sunset light. I was riding on a hill and down in the valley stood that magic village with its unpaved roads, reddish house roofs and church bell towers. The weather was still perfect. One of those early-summer evenings, when the best choice is a motorcycle ride.

But the things had changed the next day. It started to rain. Some people say that there is no such thing as bad weather if you have the proper equipment.

But there is no equipment for what happen on our third day. It was a red-code bad weather warning. Heavy rain. And this was not our main problem. The roads in Moldova have no sideways drain channels. And even if they had, those channels were not enough for that flood.

We managed to get out of Moldova in the evening. We were just near a hypothermic shock. All our “waterproof” clothes were wet, and it was very cold.

After three days in Moldova, we realized that it could be harder than we imagined. But this is the trick. There is no adventure if everything works fine. You won’t remember a thing if it’s easy. It has to be hard.