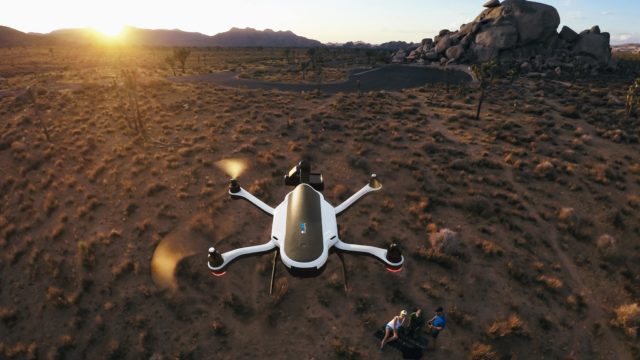 Karma GoPro just landed. Here’s why we think that you should consider buying one as a companion for your next trip.

We are all familiar with GoPro by now. Their last announcement made everybody drop their jaw: GoPro Karma – the first drone produced by GoPro – will take on the sky, starting 23rd October.

You will probably think, yeah, ok, just another drone out there. Why should I buy it when I already have one? But if you're an independent action content producer and storyteller, or just an action enthusiast, this might be a game changer.

The price range will be from 799$ without a camera to 1099$ with Hero 5 Black wich will bring it face to face with Phantom 4 market-wise. DJI saw this coming and already dropped the prices for Phantom 4 from 1399$ to 1199$. Moreover, DJI launched another drone to fight GoPro Karma – a small, 4K retractable-arm machine called Mavic Pro which costs $999. We'll write an analysis about the latter soon.

Portability, modular design and a controller that has an integrated display

Karma has retractable arms, and even with the propellers in place, it will be smaller and slimmer than Phantom 4, making it incredibly feasible for motorcycle road trips, whether it is an adventure trip or just a Sunday ride. It's also small enough to be carried in your side-case, on a bicycle or when hiking around, along with your other luggage.

Ok, it's portable, so what? Well, if portability is not an issue, you might want to take a look at the modular design, wich, for us, is the best argument to consider having a Karma GoPro drone. The camera is not fixed on the gimbal, and you can use a bunch of compatible GoPro cameras, like Hero4,  Hero5 Black or Hero5 Session (we're waiting for the complete list confirmation).

This was an incredible marketing move because it allows you to use it with a camera that you already own, and you can spend your money on other accessories that you consider significant.

The gimbal can be detached with a simple twist and mounted on a handgrip that comes in the package, for handheld use. This is gold for a biker. After shooting an aerial shot, he can jump right into some close action shooting, in seconds, without worrying or worrying less about sunlight changes or missing an important moment of what he is focused on.

The controller seems to be amazing, perfect for drone use, spartan buttonwise and with an integrated display, for the video feed. No more connecting/disconnecting  phones or tablets. For example, we had some problems with DJI Inspire 2 and Samsung S7 that resets for no reason while the drone is 400 yards away, wich is frustrating. Apparently, DJI has some issues with Android operating devices (that we experienced).

All these beeing said the obvious conclusion is that GoPro Karma is not just a drone. It's a system that will allow you to take aerial, handheld or mounted shots. This system comes in a very compact package at a very attractable price and works with a lot of accessories already on the market.

You also have shooting modes that will make your work easier in certain situations, operating modes like follow, selfie-style or cable camera. GoPro officials were very laconic about the range (estimated at around 1 km) and the fact that there are no visible antennas on the controller might indicate a weakness of the system, but that remains to be seen.

Nowadays, DJI is still one of the best solutions for aerial visuals and a beautiful piece of machinery packed with complex technology that makes it reliable in tight situations. Karma may not be so refined, but it surely looks very flexible and efficient.

We are not getting into technical details because we are waiting for the first hand experience and will return with another article about Karma GoPro after testing it. But for now, the reasons above made us consider having one. There are lots of technical issues that could arise when field using, like reception, wind resistance real life test, low light or fog conditions use, humidity and cold endurance, and the list could go on and on. Our main concern is stability because DJI made their drones really stabile and Karma will have to, at least, stay close to that.

We are excited and counting days till 23rd October, to see if Karma GoPro will deliver what it promises.