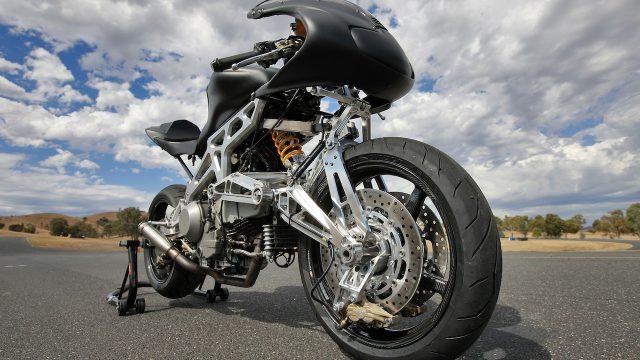 Australian tech company Motorcycle Innovation is all set to create a ‘Shockwave’ in motorcycle manufacturing – with financial help from the Australian Federal and Queensland State Governments.

Queensland engineers Ray Van Steenwyk and Colin Oddy founded Motorcycle Innovation in Brisbane in 2008 to develop the Motoinno TS3 hub-centre prototype – standing for triangulated steering and suspension system. This proof-of-concept motorcycle used a stock air-cooled Ducati 900SS desmodue motor in a radical chassis milled from solid aluminium billet, as the platform to develop the firm’s unique front end suspension design and separated steering system, for what was planned to be eventual worldwide sale

Van Steenwyk, 55, has over thirty years of advertising, feature film and TV production work to his credit, giving him a solid background in art direction, 3D animation, and media design and production. He’s also a self-taught mechanical engineer who’s proficient in CAD, and has studied motorcycle dynamics as well as available data on alternative two-wheeled steering and suspension systems. Business partner Colin Oddy, 65, is also a veteran of the TV and movie sector, having enjoyed a 20-year career bringing notable Australian film industry productions to fruition. Proficient as he therefore is in sourcing both finance and hardware to make abstract concepts achieve reality, Oddy makes an effective partner in pursuing Van Steenwyk’s ambition to develop a radically different overall motorcycle concept.

“I started riding bikes when I was just 16,” says Van Steenwyk, “although without much understanding initially of how they worked. But in 1995 after finishing up a really tough movie shoot, I got laid low with chronic fatigue for eight months. During that time I had nothing to do except think, and since one of my passions was restoring old motorcycles, I’d started to notice many different front end designs and steering geometry on various bikes. But I also became aware of the many drawbacks of telescopic forks, so I figured there must be a better way to do this. After hoovering up everything I could find written about alternative front suspension, I started work on designing something different than teles. But this had to be squeezed in between my film industry work, so it actually took me ten years to figure out this current design. Having done so, my business partner Colin urged me to quit playing with the CAD mouse, and actually build the bike. I was up in Canada working on the Incredible Hulk movie when he convinced me to give it a shot, so I quit the same week and came back to Australia to set up Motorcycle Innovation with Colin. The TS3 is the result.”

The Motoinno TS3 was developed over a nine-year period since then, employing CAD designs and FEA component simulations, as Van Steenwyk adapted his film industry talents to become a self-taught expert in CNC machining and chrome-moly welding. Initial track testing began in November 2011, with eminent expertise on hand to dial in the suspension in the shape of MotoGP set-up guru and former star rider, the late Warren Willing. In between trying to make the factory Ducati Desmosedici handle properly for Valentino Rossi, Willing worked with Motorcycle Innovation to produce a compliant and stable handling bike which delivered impressive results in a same-day comparison test with a Suzuki GSX-R750. This was conducted using the Track Motion telemetry system with a sampling rate of 100 times per second (three times greater than the norm), and analysis of the data gathered identified the Motoinno TS3 as having a consistently higher turn rate than the Suzuki, for less lean, in the hands of the same rider and on the same tyres. It was able to enter a corner faster under brakes, hold a tighter line through the turn, and could be picked up faster on the exit of the corner than the Suzuki. Each test recorded showed the Motoinno gaining up to one second per corner over the GSX-R750, proving that the TS3 technology delivers a more stable, safer motorcycle.

This led to the Australian Federal Government stepping in with a Skills and Knowledge Commercialisation grant amounting to $50,000, which essentially funded Motorcycle Innovation’s patent protection process on the front end design. The next step was to seek a $250,000 manufacturing grant from the Queensland State Government, to enable the firm to start producing bikes for sale. “These grants are relatively rare, because with the decline in Aussie manufacturing as jobs get shipped offshore [the entire Australian auto manufacturing industry has now been shut down – AC], only two or three other manufacturing companies even applied for such a grant, compared to IT firms and suchlike,“ says Ray Van Steenwyk. “We had to bring an investor to the party to get that, so that the government could effectively match their investment – but thanks to ACAC Innovation we obtained that support, and now we’ve been able to secure matching funds from the state government, without which the manufacturing project would not have been viable.”

According to Colin Oddy, these promising results signal the beginning of a genuine revolution in motorcycle safety and performance.  “We’re now in the process of designing, building and testing an all-new Motoinno TS3 Shockwave model, employing a more powerful and more sophisticated power plant than our 900SS proof-of-concept prototype,” said Oddy. “This high-end luxury streetfighter will be built for customers on a bespoke basis, using the liquid-cooled Ducati 1198cc Testastretta 11º engine. Even though this is down on horsepower compared to the Ducati Superbike engines, with ‘only’ around 150 bhp compared to the top end 200 bhp Panigale 1300, the TS3’s great power to weight ratio will take care of addressing this. Plus, this engine has great midrange torque, exactly what’s needed for a well-balanced motorcycle that is safe and fun to ride.”

“The Shockwave will use the Ducati Testastretta V-twin engine as a fully stressed chassis member,” Ray Van Steenwyk explains. “This will entail front and rear swingarm structures entirely made of carbon composite, with titanium inserts and other components which together will lighten the street-ready motorcycle’s overall weight to around 110kg, while still providing more than sufficient overall stiffness. That’s getting on for half the weight of the model from which the engine is derived. With our unique styling and patented componentry, the Motoinno Shockwave will set new standards in handling and braking for motorcycles, as well as in the power to weight ratio.”

But in addition to the Shockwave streetbike, it’s now confirmed that Motorcycle Innovation will also test its design technology in the most extreme of environments, with the planned build of its TS3 Moto2 racebike.  “We have already sourced a Moto2 600cc engine and are in the process of redesigning the TS3 front end and chassis technology to embrace this,” says Oddy. “We have already contracted with a race team and an Australian Moto2 rider ready to do testing, and then go racing. Following initial track testing in Australia planned for late 2017, the Moto2 test prototype will be transported to Spain for continued development by competing in the 2018 European CEV championship. This will enable a direct comparison with similarly powered but more conventional Moto2 motorcycles, as a demonstration of the TS3’s superior qualities of inline stability, its ability to brake later and harder into and through a corner, its agility that allows it to turn tighter but with reduced lean angle, and its earlier return to the throttle to exit a corner quicker.”

Motorcycle Innovation has an exciting and potentially ground-breaking new patented technology under development in Australia, and thanks to Queensland government support is now set to bring this to the marketplace – as well as the race track.

One thought on “Motoinno TS3 to Enter Production – Exclusive Inside Story”