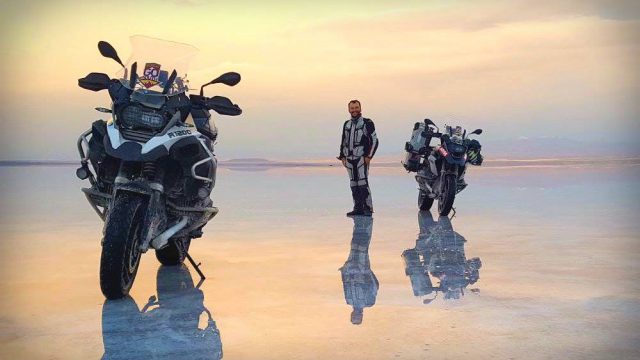 The Death Road is a touristic attraction today – when we got there, we saw a lot of teenagers riding down mountain bikes on it and having some beers at the end. If paying attention, you won’t get a bruise on the Bolivian Death Road. But don’t be fooled and don’t get distracted by the view and by the girls riding the mountain bikes. There’s no guard rail, it’s usually wet, and if you’re heading towards the precipice, well… A few decades ago it wasn't just a tourist thing. It was a connecting road between La Paz and the Yungas, there were cars and buses over there, and a lot of people died.

Salar de Uyuni – I'll never forget it. We've been lucky enough to be there in late January when the salt desert gets flooded – the view is fantastic. It's just riding on the clouds. Yeah, riding, not walking because we entered with our bikes over there. It's a bit dangerous for the electronics, I know, but it's worth it. And you’re going to see that by following the film below.

After Chile and Peru, Bolivia is the third country we visit on our R1200GS bikes in the South American Adventure. The next destination: Argentina.