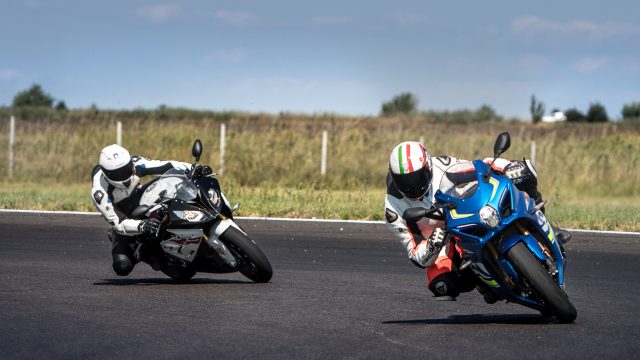 We took a top spec Suzuki GSX-R1000R and compared it with the benchmark in the segment, the BMW S1000RR. A day on track with these two performance machines was thrilling. We were amazed by the agility of the Suzuki and the immense power from the in-line four engines.

You can watch our video review below or on our

The video was shot at MotorPark Romania racetrack.

The main goal was to find out if the new GSX-R stands up for the King of Superbikes title. To help us get to a conclusion we’ve put it against the BMW that made a name for itself and stood on the top shelf since it was launched back in 2009.

Sharing the MotoGP VVT ( Variable Valve Timing ) and a full set of modern electronics Suzuki is back in business with the new GSX-R1000R. The new gixxer is set to win back its fans with a whole new engine and frame.

The Japanese motorcycle manufacturer Suzuki was the most impacted by the recession. With no big changes since 2007, the GSX-R was left aside by the performance addict superbike market.