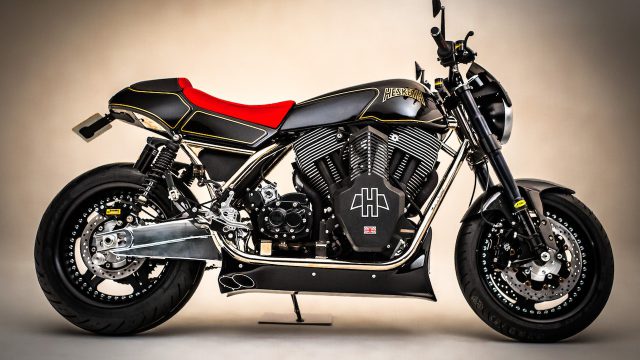 The latest model in English entrepreneur Paul Sleeman’s continued expansion of the Hesketh motorcycle brand he acquired in 2010 from Lord Alexander Hesketh, has debuted at the UK’s London Motorcycle Show.

The so-called Hesketh Valiant Supercharged is a performance-packed version of the company’s normally aspirated limited edition Hesketh 24 V-twin streetfighter, all 24 examples of which have been sold at a cost of GBP 35,000 each (including 20% tax) since Sleeman brought the aristocratic British trophy marque back to the marketplace in 2014. Last summer saw the debut of a follow up model, the more retro-themed ‘60s-style Hesketh Sonnet café racer, which Sleeman says is selling well at a lower GBP 25,000 price. However, customers will need twice as much money to buy the Valiant Supercharged when deliveries begin in the summer of 2018 – but in return for their GBP 50,000 they’ll own what stands to be the most powerful series production British-built motorcycle yet made, with Sleeman anticipating that its present 210 bhp output delivered at 5,500 rpm is likely to rise closer to 250 bhp during the forthcoming 12 months of long term development at Hesketh’s R&D base on the Isle of Man.

In a continuation of its earlier sister bikes’ Anglo-American theme, the Valiant is powered by an uprated version of the same US-built S&S X-Wedge air/oil-cooled ohv pushrod 56.25º V-twin motor already powering the 24 and the Sonnet, with S&S closed loop digital engine management. But in Valiant guise this 128ci (2,097cc) version of the Wisconsin-built triple-camshaft dry-sump engine has had its performance boosted quite considerably from the Sonnet’s 145bhp/210Nm output, via the addition of a Danish-made Rotrex centrifugal compressor driven off the crankshaft, and capable of spinning at up to 150,000rpm. The monumental 295Nm of torque at 3,000 rpm produced by the supercharged X-Wedge motor is delivered to the road via a six-speed Baker gearbox with belt primary drive, and a King Kong multiplate hydraulic clutch.

To develop the Valiant, Hesketh engineers Iain Miles and Nick Arlett have been working with noted British tuning house TTS Performance, based at the Silverstone GP circuit and UK distributors for Rotrex. “Our target was to create a completely uncompromising motorcycle that’s as extreme as possible in all areas of design and engineering, while remaining thoroughly rideable,” says Paul Sleeman. “As is always the way at Hesketh, engineering and function took priority over styling, and using the world’s largest capacity homologated V-twin engine did create many engineering challenges in terms of packaging the supercharger, the fuel systems and the exhaust, and managing heat effectively. TTS Performance have done an incredible job in delivering this within the timeframe given to them, and on budget. The idea of supercharging the bike came about because I wanted to push things a little harder to see how much extreme performance we could get out of the mighty X-Wedge motor, and with their record-breaking Bonneville performance background S&S were eager to help out.” That’s not surprising, for this is the first time one of their customers has supercharged the X-Wedge V-twin engine for series production customer sale.

The Valiant name for the new Hesketh comes from Britain’s RAF V-Bomber force of aircraft, which comprised the UK’s strategic nuclear strike force during the 1950s and 1960s. The names of the three Bomber Command Main Force aircraft all started with the letter "V", and began with the Vickers Valiant which first flew in 1951 and entered service in 1955, followed by the Avro Vulcan (first flew 1952, in service 1956) and the Handley Page Victor (first flew 1952, in service 1958). The V-Bomber force reached its peak in June 1964, with 50 Valiants, 70 Vulcans and 39 Victors altogether in service. ”Hesketh previously used the name Vulcan on its new version of the V1000 motorcycle developed by Mick Broom back in the ‘90s, and Vauxhall used the Victor name in the 1950s,” says Paul Sleeman. “So Valiant it was!” Sorry, Chrysler…!

In creating the new motorcycle Sleeman says he set out to utilise as many UK suppliers and engineering partners as possible, beyond the American engine. The twin-loop chrome-moly tubular steel frame is similar to those used on the 24 and Sonnet, and is produced by GIA Engineering in Nottingham, formed in 2007 by Gavin Goddard. A 20-year veteran of respected British chassis-builder Spondon Engineering in nearby Derby, Goddard has lately been joined by other former Spondon employees after Norton owner Stuart Garner acquired the company, and moved it into the Norton factory. The Valiant’s GIA-made extruded aluminium swingarm carries an integral 4.5 litre oil tank for the dry sump engine, thus resolving the issues of space on the bike to mount the Rotrex supercharger. The British-made fully-adjustable K-Tech KTR-2 50mm inverted telescopic fork is carried at a 25-degree head angle with 96mm of trail, with twin K-Tech Razor shocks. Wheelbase is 1550mm/61in.

The Valiant carries Hesketh’s own design of three-piece composite Astralite-style wheels machined from solid aluminium billet, then riveted together and shod with Avon Storm 3D tyres – the front 4.0 in. wide wheel carrying a 120/70-17 AV65, with the rear 190/55-17 AV66 mounted on a wide 7.00 in. rim, presumably to spread the tyre as much as possible in order to deliver the vivid acceleration coming from the supercharged engine’s humungous torque. The twin floating 320mm front discs are gripped by Hesketh’s own radially-mounted one-piece six-piston billet calipers made for them by Pretech in Reading, with a French-made four-piston Beringer caliper biting on the 250mm rear disc. Dry weight is 239kg with the 17-litre fuel tank empty.

The primary drive cover, rocker covers, supercharger shroud and tripleclamps were all machined from solid aluminium billet by Billet World in Derby to Hesketh’s design, while the carbon fibre bodywork is produced by ACT Performance in Surrey, including the 790mm/31in-high single seat with plush quilted padding. Passengers need not apply for something this powerful! The one-piece taper-section Rizoma handlebar carries a Domino quick action throttle and Motogadget bar end indicators, but Paul Sleeman admits that the 150mph Smith’s speedometer might be a tad pessimistic. “If development continues as well as it’s started, I reckon a 200mph clock might be needed,” he says. “It all depends what gearing we put on it,” Wheelie bars might also be a useful option….

2018 will see five models in the Hesketh range for the first time in the company’s 36-year history, once the Valiant enters production.