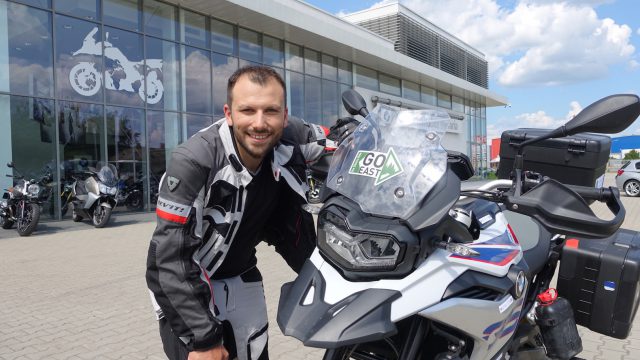 Ukraine | This is how our adventure begins

As some of you might now, I’m living in Bucharest, Romania. Just at the border between East and West. Some of you might mistake it for Budapest, but I assure you it’s a completely different city. However, it doesn’t matter because I’m leaving to Siberia. Magadan, to be more precise. I’m planning to ride the Road of Bones in the Russian Far East and my journey starts from home.

I didn’t sleep so well last night. Don’t know why. It didn’t happen to me in a while, not even when leaving to South America for the Quechua Ride. Everything is packed, the intercom is charged, the drone… I hope it’s not going to break again on the road. So, let’s go. I have about 600 kilometers ahead.

Nothing special in Romania besides some crashes – that E75 road is dangerous and the drivers are driving like crazy. Of course, we could have chosen a more scenic route, but it’s no time for that. There’s the Trans-Rarau nearby, there’s the magic Bucovina region. But the skies are grey, and we need to roll. Maybe another time.

I’m on a brand new F850GS – just 1,000 kilometers – packed with a crash-bar, 2-litre fuel reserve, engine shield, auxiliary lights, smartphone holder and the three-piece standard plastic luggage, full of things. It feels a bit heavy, and I don’t like it – but I had to carry a lot of stuff to film. More than that, I detuned the motorcycle to work with poor quality petrol. So it doesn’t feel that fast. But it doesn’t matter. It’s no time for racing. And the Mitas E07 tires don’t feel that safe under hard braking – they are quite slippery – but I have chosen them for the long wear and, hopefully, they will feel better after the first 500 kilometers.

The first border passing: Ukraine. Things are pretty simple – we just have to show the documents and that’s it. It takes us about an hour to pass. The road seems to be ok at the beginning, but after that the things are getting worse – a lot of potholes and still a lot of kilometers to ride. After an exhausting day, it’s time to have a break. We find a nice and cheap hotel in Dunaivitsi, a small town in Ukraine. Nothing to see there, just a transit place. Time to sleep. Long day ahead tomorrow.

We wake up early because we have another 600 or something kilometers to do in a country with poor road infrastructure. There’s a highway, still. But a quite awkward one – if you don’t pay attention you might hit a truck that comes in your way from the contraflow lane. It’s completely all right to do it on the Ukrainian highways since there are special places to do it.

Then it starts the rain and the things are getting complicated. I just started to watch “The Rain” on Netflix, and I’ll try to forget about it. I have a brand new Gore-Tex suit, but after an hour or so I’m starting to feel it wet. It was a bad decision to leave my rain suit at home.

Ukraine doesn’t feel very friendly – grey block of flats that remind me of the ones in 90s Romania, poor roads and a lot of rain. The people don’t seem to live a dream-life – it’s hard to do it in a country that has experienced acute political, economic and security challenges in the last years. The GDP had a 16% loss in 2014-2015, and the growth remains weak. The introvert people, grey blocks, poor roads, crazy drivers, and rain don’t offer a great picture. But it’s about being there at the right or wrong moment. This one happens to be a wrong one, and I feel that I must give this country another chance before telling it doesn’t worth a visit.

I pass through Kiev without having even a 5-minute stop. I feel bad about it, because I heard that Kiev is a completely different story compared to the other cities we passed through. Lvov also. But I don’t have enough time now. I must be in Moscow tomorrow. The night is catching us in a village Baturyn – nothing special here either. I’m using the hairdryer in the room to dry my wet motorcycle clothes and fall asleep. Another long day ahead.