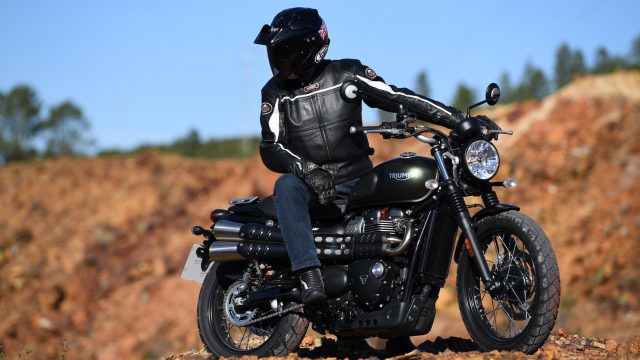 Alongside the five big-bore 1200cc dohc variants (T120, T120 Black, Thruxton, Thruxton R and Bobber}, the 900cc Street Twin standard model introduced a year ago has now been joined by the Bonneville T100 and T100 Black, plus the Street Scrambler and Street Cup café racer, in the lineup of bikes powered by the smaller capacity single-cam version of Triumph’s new generation liquid-cooled eight-valve parallel-twin motor.  Costing GBP 8,900 upwards in the UK (including 20% tax) depending which of the three available colours is chosen, the new Triumph is more expensive than the entry-level Ducati Scrambler Classic by GBP 368, but less costly than Ducati’s more rugged new GBP 9,395 Desert Sled, or the twice as powerful BMW R nineT Scrambler. which with its GBP 10,550 starting price isn’t really a direct competitor like the Ducatis surely are. 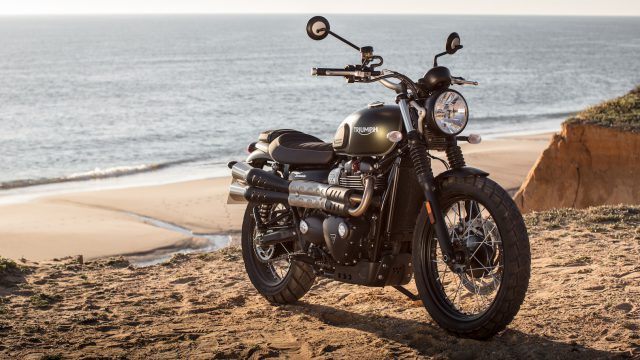 Reaching showrooms in February the new Street Scrambler will carry Triumph’s hopes for similar sales success to the outgoing 865cc model, 17,000 examples of which have been sold in the past decade of production. In doing so, the company’s engineering team headed by Stuart Wood has taken the Street Twin introduced a year ago, and retuned its water-cooled parallel-twin five-speed 900cc motor for a greater spread of torque [see Technical sidebar], while also revamping the chassis for notional dual-purpose use by repositioning the footpegs in a better position for offroad riding, and fitting longer rear shocks. But with just 120mm of travel at either end from its Kayaba/KYB suspension, and not a huge amount of ground clearance allied to a strictly cosmetic plastic sump guard, the new model is essentially a road bike, albeit shod with offroad-friendly dual purpose Metzeler Tourance tyres which are much less noisy or vibrationary than the previous model’s chunky Bridgestones when riding the bike on tarmac, especially in town or slow traffic. 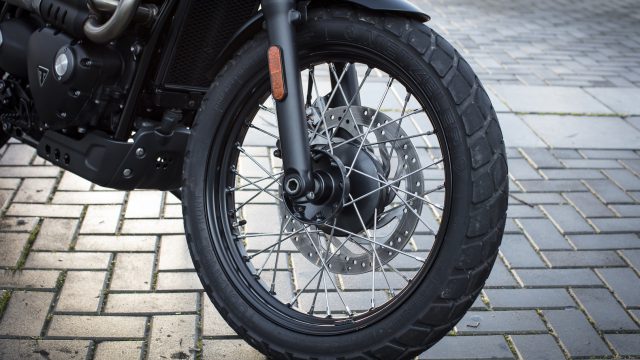 However, even if the suspension’s too hard and short-travel to cope with any serious bumps or potholes, it’s perfectly adept at handling loose-surfaced dirt roads, as proved by an hour riding around the original Rio Tinto mine northwest of Sevilla during a 125-mile/200km day’s ride out into Spain’s southern province of Andalusia, where Triumph’s press launch for the Street Scrambler was held. Iron ore, copper, silver and gold have all been mined here over the past 3,000 years, and the new Triumph was an ideal mount to explore its technicolor rock strata via shale tracks, even if when standing upright on the so-called Bear Trap offroad-style footpegs your right foot ends up being pushed onto the end of the rest by the stacked high-level exhausts’ heat shield. But there’s still a great sense of control in doing so, aided by the light clutch lever action which also made riding the bike in stop-start Sevilla traffic both untroubling and untiring. So too did the precise, light-action gearchange which is heaps better than the previous Scrambler’s much notchier shift action, and especially the smooth, controllable pickup from a closed throttle. This denotes superior fuelling on the part of the Triumph’s EFI, especially compared to its Ducati rival’s much snatchier pickup in the bottom two gears – a problem that wasn’t yet fixed in the desmo V-twin model’s first two years of production, though I haven’t yet ridden a 2017 version. When it comes to smooth, supple torque delivered in a flexible, forgiving manner, the Triumph is clearly the class paragon. 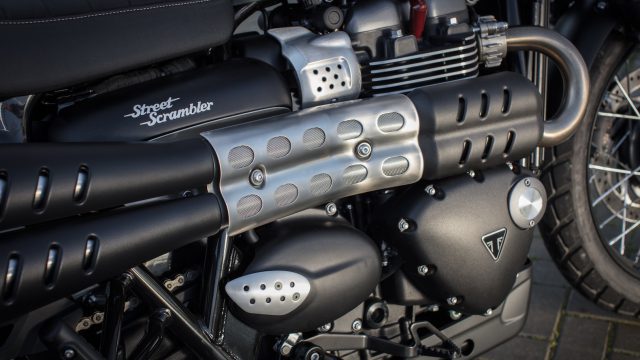 Just as well, in that case, for the Street Scrambler is a model where convenience and cool will arguably be more important to likely customers than actual performance. The zestful snap of the original McQueen-era TR6C dirt sled, as manifested in The Great Escape, has here been replaced by laid-back look-at-me boulevard brio more redolent of the Triumph Tiger 100 used by Warren Beatty’s hairdresser character to zap around LA from one female conquest customer to another a decade later, in the lifestyle movie Shampoo. That’s because Triumph has equipped the Street Scrambler with the lowest-spec version of its revamped family of parallel-twin motors, producing 54 bhp/40.5kW at 6,000 rpm – but much more important is the 80Nm of torque, peaking as low as 2,850 revs and holding steady until almost 5,000 rpm, when it only gradually starts to fall away. This means holding third gear out of the five available – and I never once found myself searching for a non-existent sixth ratio – will take you almost anywhere you want to go, at whatever speed, until you hit the open road.

The huge flexibility of the 900cc motor makes a good case for saying that the Street Scrambler is actually Triumph’s equivalent of a twin-cylinder maxi-scooter, chic and convenient for city use as a commuter, bar-hopper or delivery bike, with sufficient rather than sporty performance, but so-cool as well as so-retro looks. The Street Scrambler’s true natural habitat isn’t anywhere offroad, but rather city streets, especially traffic-clogged roads where you can use its easy clutch action, responsive but controllable throttle, light and immediate steering with that wide (831mm) handlebar and the skinny 19-inch front tyre, to plot an ideal course through rush-hour traffic with the help of the relatively tall (792mm) seat. Its height is perfectly judged to be just low enough to sling a leg over easily at rest, but just high enough to see over car roofs and plan where you’re going once you’re aboard. It also rather surprisingly has a snuggle-down factor that was missing from the outgoing model, where you felt overly perched on top of the bike and not a part of it. The new bike’s upright riding position and taller suspension compared to the Street Twin plus the wide ‘bar make it a formidable and fun traffic weapon. Just don’t expect to out-accelerate a Ducati Scrambler away from traffic lights, because at 213kg dry (vs. 191kg for the Ducati) the Street Scrambler is pretty porky, even if it hides its weight well in terms of handling. Still, be ready for your mate aboard his Yamaha T-Max to out-hustle you in front of everyone leaving the bar or disco with your respective dates sitting behind you. Just that you’ll be leaving with so much more style than him – Show, rather than Go, but to a different soundtrack. 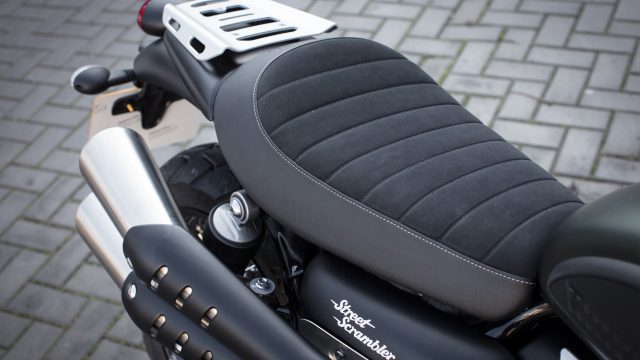 For the sound of the Street Scrambler is now as satisfying as its Scrambler forebear’s muted murmur was disappointing – the stacked crossover exhausts give a satisfyingly rorty response when you twist the wrist, while at the same time looking good and meeting Euro 4 compliance. Best of both worlds – kudos, Triumph. Plus the heatshield does actually protect the inside of your right leg in a way that the outgoing Scrambler’s largely failed to do. Thumb the clever combined killswitch and starter button to send the 900cc liquid-cooled motor’s 270-degree crank spinning up easily into life, leaving you to relish the unexpectedly glorious note of the stock stacked exhaust. However, while the controls are very light and easy to use (especially the clutch), the single front 310mm disc with its twin-piston caliper gives barely adequate bite in stopping a bike weighing a hefty 213kg dry hard from speed on the highway, though its 255mm rear companion gives effective but not excessive braking when you step on its lever – a level that’s ideal for offroad use.

Faced with the open road, the Street Scrambler’s excellent lowdown torque lets you gear up and go, with the midrange oomph its predecessor was lacking allowing you to accelerate smartly into a gap in the traffic at 50 mph/80 km/h. It’ll be an ideal tool for the Paris Periphérique or the San Diego Freeway at 4pm on a Friday night, then when the traffic clears the Scrambler’s optimum cruising speed is a relaxed 75 mph/120 kmh, with the engine turning over at exactly 4,000 rpm. And it will comfortably do the ton (100mph/160 kmh) if you’re really prepared to hold on tight enough. Which not many customers will want to do – they’ll prefer to just go with the flow till they come to a snarl-up, then use the Scrambler’s easy steering and that ideal view ahead over cars which its stance provides, to jink a way through traffic – this will be a favoured courier bike as well as an ideal ride-to-work traffic tool. But outside town on the open road the Street Scrambler carves corners with zest and brio – its steering is neutral and predictable, with the wide ‘bar giving plenty of leverage as you flick the bike from side to side with heaps of confidence. It feels balanced and nimble in a way its predecessor never did, and that’s surely down to the sharper revised steering geometry.

In Triumph’s now totally revamped twin-cylinder range the new Street Scrambler is in many ways a 900cc option to the equally brand new 1200cc Bobber. Both are brilliantly styled and well-engineered, but with contrasting levels of engine performance. I forecast that the Bobber will initially outsell the Street Scrambler, but its sales will then taper off as its dynamic looks become – well, not exactly commonplace, but still increasingly usual. The Street Scrambler on the other hand will sell steadily and constantly. Five years from now it’ll be interesting to see which one has beaten the other in terms of overall sales.

But both are excellent motorcycles – so, which one’s for you?!