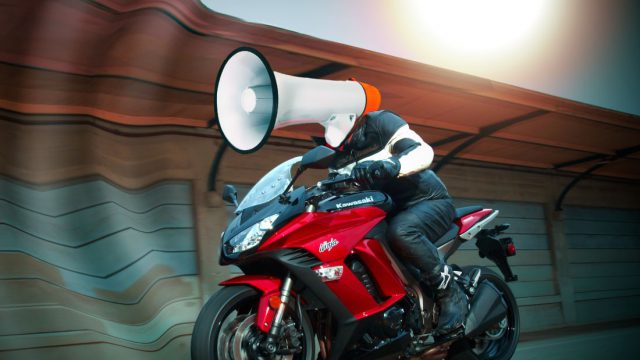 “Loud Pipes Save Lives” is one of the most common motorcycle myths. And, unless you're living in a cave, I bet that you have a couple of friends who told you it works. But as much as we like a Screamin' Eagle sound or an Akrapovic Symphony, we have to admit that loud pipes don’t save lives.

According to the “Hurt Report,” conducted in the USA, 75% of motorcycle accidents involved a collision with another vehicle, usually a car. The failure of motorists to detect and recognize motorcycles in traffic is the predominating cause of motorcycle accidents. On the other hand, a New Zealand study showed that in 65,3% of the analyzed accidents, the clothing made no contribution to the conspicuity of the rider.

Unfortunately, there is no study about the sound contribution to the conspicuity of the motorcyclists, so we don’t have scientific proof to confirm or disprove our theory.

But you don't need scientific evidence to know that most motorists enjoy listening to music when driving. The radio switches on automatically when turning on the engine and it might be hard for a driver to hear you even if you have an after-market exhaust.  Or you should consider the texting drivers. Or those who are watching YouTube videos while driving.

And what about that guy coming from a secondary street that doesn’t give way because he "doesn’t see you?" And if he doesn’t see your headlight, you can be sure that he will not hear your engine.

What I mean is that there are so little chances to be saved by your pipes that you should focus on another thing. The riding skills, for example. Practice emergency braking, try to avoid obstacles at high speed in a safe environment, learn how to ride in the rain, etc.

Also, there’s no exhaust note that could save your ass when popping a 60 mph wheelie in the city. There’s nothing wrong about a wheelie – I have a mate who does is every single day just as a warm-up. You can ride fast, and it can be ok. But you should do it in a safe environment, else get yourself ready for worse.

There are different opinions regarding the “Loud Pipes Save Lives” matter. And there is no absolute truth. The loud pipes might draw some attention, but they are useless without some braking skills and good behavior in the traffic.

Also, there’s nothing wrong with the loud pipes. It’s just that they don’t do the job for you. If you’re riding like a hooligan and don’t have some minimal riding skills, you can add as many loud pipes as you wish. They could wake up the death instead of saving you.

10 thoughts on “Why Loud Pipes Don’t Save Lives”