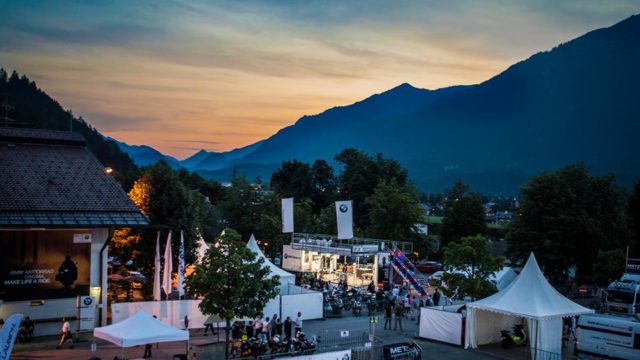 Are you ready to roll but have no destination? Here are 10 motorcycle-related events you should see this year.

Once in two years, Ducatisti all over the world gather at Misano, Italy, for World Ducati Week. There is a Weekend, in fact, not a week ‒ three days of red and white passion. Casey Stoner will be there such as other famous Ducati Corse pilots. You can chill at the Land of Joy ‒ the Scrambler Dedicated Area and you can join the parade. It will be a special edition which marks 90 years of Ducati History.

Model highlights, motorcycle fun, more than 40,000 visitors, live music and… a lot of Bavarian beer. Each year, BMW enthusiasts go the Garmisch Partenkirschen for meeting each other and having a great party. It’s not just the event, but the surroundings. You’re in the Alps and all those very famous mountain roads and views are nearby: Grossglockner, Stelvio, The Dolomites. You can reach all over in a day ride, visiting one of the most beautiful places on Earth.

They say it’s an event you must see once in your lifetime. At least. The highest attendance was last year when 739,000 bikers joined the party. The first Rally was in 1938. Then, the festival took place in the first weekend of August. Now it’s a full week of party, one of the most famous of its kind in the world. Join the parade on Monday if you want to feel like a VIP. It’s called the “Mayor’s Ride”. That’s because the parade is led by the Sturgis Mayor Mark Carstensen, motocross legend Kevin Windham and other local VIPs. Uhm… You must pay for it: $189 (per person) to ride along the Mayor.

It all started in 1937. The hard sand, the warm winter days, and the excitement of the first beach motorcycle race and some enthusiast bikers. These were the elements that created an event to become one of the biggest biker events. Now it’s the 75th anniversary of Daytona Bike Week. One of the best things to do is to ride “The Loop” ‒  a 22 miles road to Florida’s natural beauty. You can get more informations from the “Official Welcome Center” in Riverfront park.

It’s the most famous, challenging and deadliest motorcycle race. The Isle of Man TT is held on a 37-mile “track” that consists of closed public roads. “I did a lap of the Isle of Man, and I understand why people love this because it’s f**king awesome – it’s unbelievable, great. But, unfortunately, it’s too dangerous. Sometimes, riders are crazy,” said the seven-time MotoGP Champion Valentino Rossi. The Isle of Man TT is set over a two weeks period, the first for practice and the second for racing. The most important race is the Senior TT on Friday, but the sidecar race is also very interesting.

Every MotoGP Race is spectacular, but if you want to really feel the vibe you should go in Italy. The “corse” passion is very intense in Italy so join the Ducatisti and the VR46 Fans and listen to the rumble of the engines. The Misano World Circuit Marco Simoncelli has a 2.36 miles (4.2 km) length, 6 left corners/10 right corners and a 565 m straight. After the race you can enjoy a bottle of Prosecco and feel the Italian breeze.

The Goodwood Festival of Speed currently attracts 100,000 people on each one of the three days it is held. The main attraction of the festival is the Hillclimb ‒ a 1.16-mile race which is very technical and challenging. Each day more than 300 cars and motorcycles spring their way up to the top of the hill. The fastest time ‒  41.6 seconds was set by Nick Heidfeld in 1999 with his McLaren MP4-13. Pay attention: the entry is by advance ticket only. It’s not possible to buy tickets on the day.

Very rare & custom motorcycles, art, music, and surf. These are the main ingredients of Wheels and Waves festival. Especially since the “retro fashion” is one of the main currents in motorcycle industry, festivals such as Wheels and Waves reunite the beard-bikers and the biggest motorcycle brands. For example, BMW presented last year its Scrambler Concept at Biarritz.

Set on the superb Lago di Como in Italy, Concorso D’Eleganza Villa D’Este is the most exclusive location for historic cars and motorcycles. Two classy villas will transform to expo venues for old Rolls Royce’s, Ferrari’s, and other blue-blooded names. More than 50 historic cars, the finest of their era, built between the 1920s and the 1980s will be exposed and will run for the annual “Best of Show” prize, decided by an exclusive panel of experts.

On Sunday September 27th 2016, more than 60,000 gentlemen in 410 cities got up in their retro motorcycle saddles for an epic ride. Bobbers, scramblers, and other beautiful creations rode down the streets of cities such as London and New York and raised over $5 million for prostate cancer research. The date for 2016 event wasn’t announced yet, but it’s traditionally set for the last weekend of September. The 2016 Distinguished Gentleman’s Ride will take place simultaneous in more than 400 cities around the world so you can easily join it. All you need is a suite, a retro bike and a smile on your face.