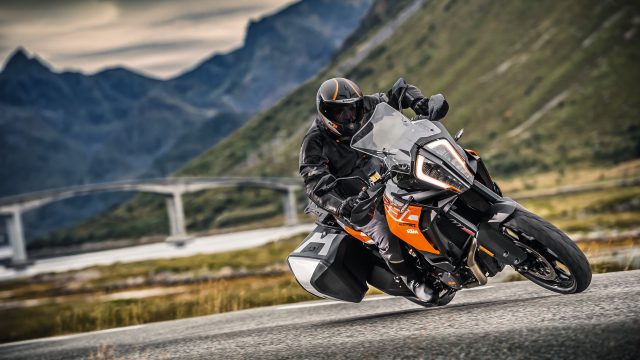 KTM revamped its entire adventure-travel range. Now we have a list of five big V-twin bikes derived from two versions: the 1090 Adventure and the 1290 Adventure.

Yes, you heard it right. The 1190 model disappeared from the range and will be replaced by the 1290 Adventure S. The 1050 was transformed to 1090 and the old 1290 Super-Adventure will be named Super-Adventure T.

The new KTM 1290 Super-Adventure R has the 1301 cc engine, capable of 160 horsepower, a direct rival to Ducati’s Multistrada Enduro. It’s the same engine we saw on the last year’s Super-Adventure model, but it was refined and modified to meet the Euro 4 regulations.

The Super Adventure R comes with a new LED head-light which includes the cornering lights function, controlled by the lean angle sensor.

It’s got a 21 front, fully-adjustable WP suspension and a whole range of fancy electronics which include cornering ABS, traction control, and five riding modes.

Another premiere for KTM is the new TFT full-color dash, which looks just like the ones we saw on the latest-generation superbikes.

The Super Adventure S is replacing the 1190 Adventure, and it has a 19 inches front, cast wheels, and Pirelli Scorpion Trail tires. So it’s a street-oriented travel bike.

It also features a semi-active suspension and the same electronics package as the R model.

The Super Adventure S comes with the new LED headlight and the full-color TFT dashboard.

The 1090 Adventure replaces the old 1050. Technically, it represents a kind of entry-level option in KTM’s big-travel range. It will be cheaper, smaller, lighter, and less powerful. But less powerful in KTM terms means 125 horsepower.

It will come in two versions. One of them is the standard 1090 Adventure with cast wheels, a 19 inches front and street-oriented tires. The other is the 1090 Adventure R, which comes with spoked wheels, crash-bars and a 21 front.

With this travel-enduro fleet, KTM offers an option for almost every kind of adventure seeker. "Almost", because we got nothing yet about a middle-class bike.