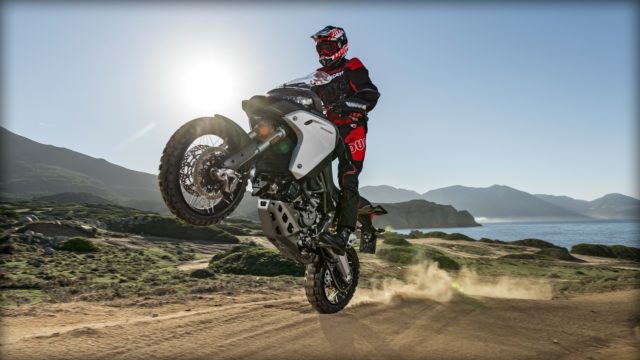 Actually, Ducati says it’s the “wild” side. But the essential thing is that 1200 Multistrada Enduro is making way for Ducati to enter the adventure market. The real one.

After setting the base for the “sport-adventure” class, the well known Multistrada gets a real adventure appeal. It has a 19 inches front wheel, a 30 liters fuel tank and aluminum hard cases. R 1200 GS, watch out!

Ducati Multistrada was a great bike on the tarmac, but when it came to dirt, it just had the looks being not too capable of going through trails. But the things could change with the new Multistrada Enduro.

Multistrada Enduro comes with a 19 inches front wheel, which should be able to get the bike over the hills and far away. Moreover, it has a 200 mm wheel travel and DSS (Ducati Sky Hook) semi-active suspension. But the most interesting part when it comes to suspension is the “jump” function. According to Ducati, the “advanced electronics” are capable to recognize jumps and automatically adjust the setup for “soft landings”.

If it works properly, it would be interesting to see how much you can jump with a 254 kg bike (wet weight).

Multistrada Enduro has an enduro riding mode which tempers the power to 100 hp and ensures a smoother deliver. The electronics also take care of suspension, ABS and DTC (Traction Control).

It also has the classic riding modes – touring, urban and sport. All of them, except the “urban” are using the whole power range: 160 hp.

Multistrada 1200 Enduro shares the 2015 Multistrada Engine, which embodies the Variable Timing Valve actuation technology and is capable of 136 NM @ 7.500 rpm.

The new adventure bike from Ducati has a 30 liters fuel tank which can give a 450+ km range. Also, the cases are made of aluminium, and have a 128 liters total volume.

Let there be light

Another nice feature of the new Multistrada Enduro is the Full Led lighting system which also has cornering lights.

Ducati has four different accessories packs – enduro, sport, tour and urban. Of course, there was also unveiled a new clothing line, which will be available at the dealers.