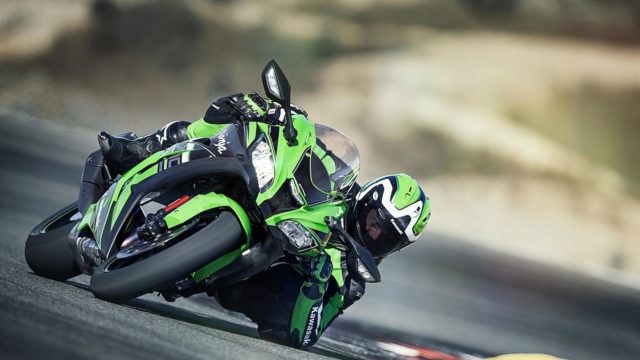 The new ZX-10R superbike doesn’t look too different compared to the old version, but there are serious technical improvements announced under the fairings.

The engine is the same 998 cc inline four, but it was updated for a stronger low-mid range that should give a better exit from the corners. It is also Euro IV compatible. Among the updates are a revised cylinder head, a more track-oriented gearbox and electronically actuated valves for a more precise engine control. The inline-four also revs faster, according to Kawasaki, due to a new crankshaft, while the inertia force is lowered by 20%. This should give a better handling in the corners.

The new exhaust has titanium header pipes and silencer, contributing to light weight and mass centralization.

One of the most important updates for the new ZX-10R is the suspension system. The Showa “Balance Free Fork” embodies a technology that comes directly from Kawasaki’s World Superbike machines, Kawasaki says. The damping force is generated in a special chamber, outside the main tube, which allows the surface of the main piston to act as a pump, pushing oil towards the valves. This way, you won’t get balance fluctuations as a cause of compression and rebound anymore, which makes the bike more stable in a racing pace.

Moreover, compression and rebound damping are generated and adjusted completely independent to one another.

The rear shock was also updated and Kawasaki says it offers a better comfort, traction, and reduced weight. Also, it has an almost horizontal position, due to a back-link mounting system.

The aluminum twin-spar frame has a steering head revised geometry, and a longer and more rigid swing arm, while the revised bodywork offers a larger upper cowl for better aerodynamics on track.