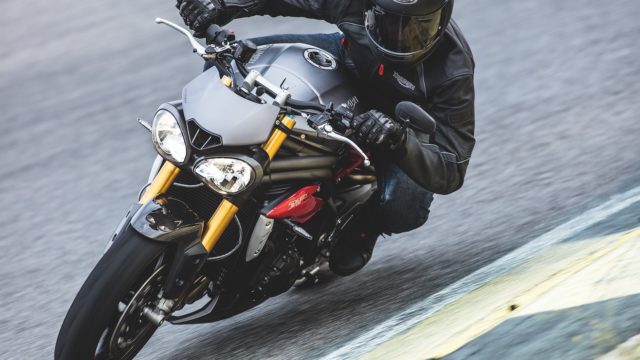 Both models have an updated engine. Triumph says there were 104 components changed, in order to deliver more power and torque across the rev range. A new combustion chamber, new cylinder head, a new crank and new pistons are among the most important of them. Moreover, the airflow should be better due to the new exhaust.

The new Triumph Street Triple S has ride-by-wire throttle, a slippery clutch and a smaller radiator.

The new electronics enable five distinct riding modes: rain, road, sport, track, custom, that are linked directly to the throttle and traction control. The ABS is rider-selectable, and the front calipers are high specs Brembo.

The suspension is fully adjustable.

The R version is lighter, has a better suspension and improved looks and details. The suspension comes from Ohlins: NIX30 upside down fork and TTX36 RSU shock.

The mudguard and fuel tank panels are made from carbon fiber, while the color themes are crystal white and matt graphite.

Unfortunately, Triumph didn’t release yet the performance figures and the weight, so we don’t know for sure if the new 1050 triple will match the market-leading street fighters in terms of performance.

The new Speed Triple could have about 140 horsepower, which puts it in line with Suzuki GSX-S1000 and Kawasaki Z1000.