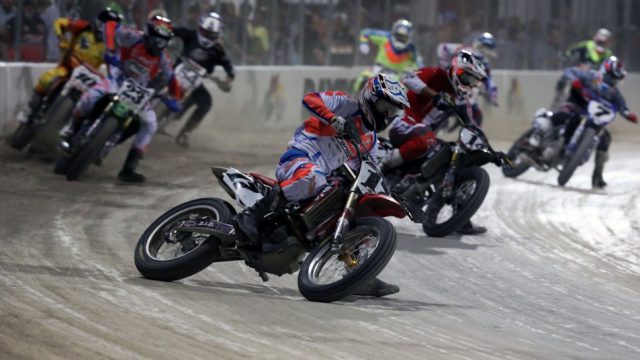 The dramatic rebirth of the American Flat Track/AFT race series

No doubt about it – 2017 was a seminal year in American Flat Track. Returning to racing for the first time since 1952, Indian proved dominant with its all-new Scout FTR750 racing machine developed by Swissauto, its wholly-owned subsidiary in Switzerland. In the 64-year history of the championship, never before has a new motorcycle come in and dominated quite like the FTR750 did last season. Plus, there was the transformation of Jared Mees, who this year clocked up his fifth AFT Twins National Championship. Mees used to be a guy who won titles by being on the podium nearly every weekend, not necessarily by winning races. That all changed in 2017 with his second ever most wins in a single season.

The other key element in the 2017 season was Harley-Davidson’s struggle to get on the pace. The factory Harley team of Jake Johnson, Kenny Coolbeth Jr. and Brandon Robinson didn’t score a single win in 2017 with their new XG750Rs. Only Johnson managed a solitary podium finish with third at the Buffalo Chip TT in Sturgis. The Motor Company should give privateer Jeffrey Carver a significant reward for keeping Harley from going winless for the first time ever in the history of American Flat Track. Carver’s win at the Lone Star Half-Mile in Fort Worth, Texas on a venerable XR750 was the sole AFT victory for Harley-Davidson in 2017.

What Indian did in Flat Track racing in 2017 was unprecedented. Hiring 2016’s top three point scorers Jared Mees, Bryan Smith and Brad Baker in a single team showed they were serious. The all-new FTR750 was dialled in from its Daytona debut onwards, and the results were unbelievably good. Indian won 14 of the 18 AFT Twins Nationals, took 37 podium finishess with six podium clean sweeps, and finished one-two-three in the championship. The 2017 AFT Twins manufacturers victory tally saw Indian with 14 wins, Kawasaki with three, and Harley-Davidson with one. That kind of dominance is not unheard of – Harley won every AMA National in 1956, for instance – but it’s very rare today in almost any branch of two-wheeled sport.

Looking back in the history books, 1984 season was the last year a manufacturer took the series by storm with an all-new bike, when Honda factory riders Ricky Graham and Bubba Shobert aboard the V-twin RS750R won 19 of the 33 Nationals to have Graham and Shobert finishing first and second in the series. Honda won the AMA Grand National Championship for four consecutive years before exiting from Flat Track racing.

Indian’s current dominance raises the question of whether history will repeat itself. Honda was unhappy about the restrictor plates that the AMA placed on the RS750R to slow the bikes down so riders aboard the already then venerable Harley XR750 could keep up. If Indian continues to dominate it’ll be interesting to see how things play out, since already the Harley faithful are crying ‘unfair’ on the grounds that Harley and other manufacturers are running a production-based motorcycle in the AFT series, with Indian the only firm with a purpose-built racer (never mind that for over 40 years Harley was the only such company with the purebred XT750 dirt oval race machine!).. Will the fans – most of them Harley-Davidson riders) continue paying to attend races when one maker has such dominance? It’s a fair question. OK, Harley-Davidson’s the one company that’s supported Flat Track racing down the years, good times and bad, so the overwhelming hope is that it can improve its race bike, so the AFT series can have a true Harley-Indian battle once again.

There were five race winners this past season. 2017 champion Jared Mees scored 10 victories, his Indian teammate Bryan Smith four, Kawasaki privateer Briar Bauman took two wins and Jeffrey Carver (H-D) and Henry Wiles (Kawasaki) had a victory each. In just one season Mees went from 20 career wins to 30, vaulting him from 16th on the all-time Grand National Wins list to ninth, passing legends like Joe Leonard, Dick Mann and Bart Markel in doing so. Ironically, Bryan Smith’s four wins pushed him into a tie with Mees for ninth on the all-time list. Wiles is right there too with 29 career wins. Kenny Coolbeth, fifth all-time with 36 career wins, remains the winningest active rider in the championship, but Mees is closing in fast. Mees’s sheer number of wins ties him with Scott Parker for second in the most-wins-in-a-season category, that’s still headed by the late-great Ricky Graham with 12 wins in 1993. Mees is now third for the most Grand National Championships on five, behind only Scott Parker and Chris Carr.