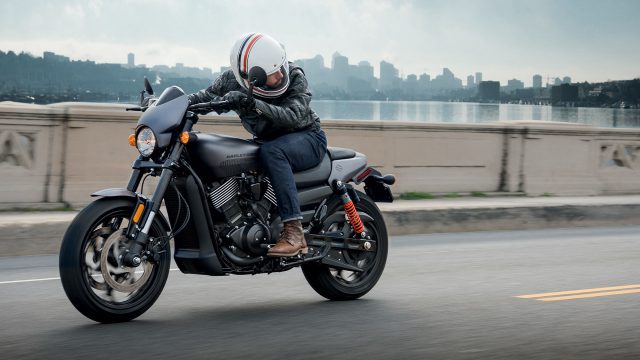 Harley-Davidson officials say that the new Street-Rod was built to appeal to a specific demographic in a space where Harley didn’t have a product. The guys at “Cycle World” rated this bike as the Harley equivalent to the Yamaha MT-07 [FZ-07].

A pair of 300 mm front discs were designed for improved braking power (compared to the single disc on Street 750).

Harley-Davidson describes its Street Rod as having a “pure, stripped down, aggressive look.” What we see is black, grey and no chrome.

The 750 cc series was created for those into urban riding with fiction over form in mind, but also looking for a Harley-Davidson.

The new Harley-Davidson Street Rod can be fitted with original optional parts such as LED Headlamps, diamond black hand grips or diamond black footpegs. There’s also a whole range of gear you can choose from.