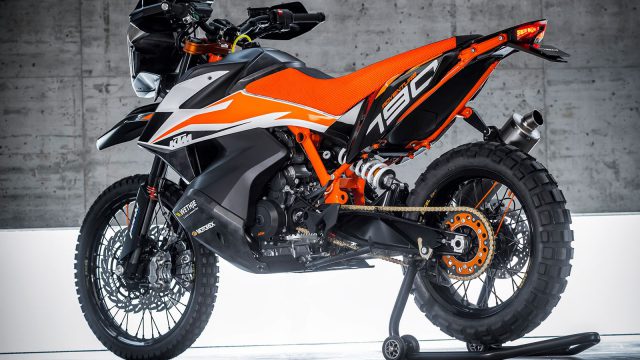 Launched at EICMA 2017, the new KTM 790 Adventure wants you to ride it everywhere

We’ve seen it being tested since 2016 now but the time has come for KTM to gladly announce the 790 Adventure.

Well, the bike the Austrians brought to EICMA 2017 is not quite the production model but a prototype that gives us enough view of what to expect from the upcoming 790 Adventure.

The concept’s design follows the aggressive angular language KTM got us used to and boasts a Dakar-style chromatic scheme just to remind us of the brand’s rally domination.

The 790 Adventure is making use of the 799-cc LC8c parallel-twin engine also found on the Duke, packing 104 hp. Throw the 180-kilogram estimated dry weight in the equation and you got yourself a hardcore enduro bike boasting an amazing power-to-weight ratio.

And it’s not about the power but also the way it handles. KTM put a lot of thought ― and engineering ― in developing the 790 Adventure to be as good as it can on unbeaten paths. The two-chamber fuel tank is mounted as low as it was possible, to keep the motorcycle’s center of gravity close to the ground. The WP suspension setup is, as always, good news for the enduro fans.

With the heavily-updated Tiger 800, the upcoming Tenere 700, and BMW’s 850GS, the 790 Adventure will face plenty of competition in the middleweight class. But it doesn’t look worried at all…