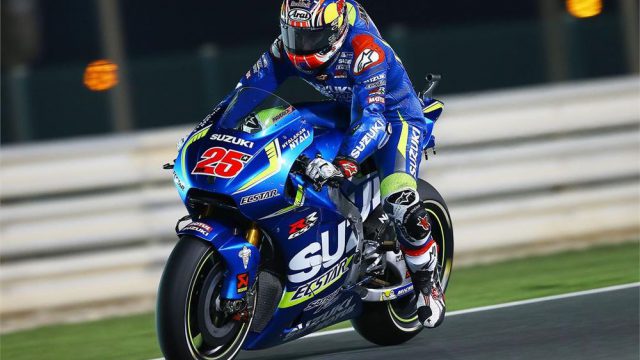 The practice session for the first round in the calendar is about to end. So we have just one day to go before the Qatar Sunday race. Here's a short note about the underway testing at Losail.  The stakes are high as Rossi’s new team mate Maverick Vinales seems unstoppable on the new YZR-M1.

The reigning champion Marc Marquez struggles to keep the pace imposed by the new Yamaha rider. Vinales seems determined and ready to take the lead from the first round, but will he be up for the task on Sunday?

The Spanish rider seems adapted with the new bike and led the way across all winter test in Malaysia, Australia and Qatar. He managed to put half a second (0.596s) between him and Marquez, while Rossi stands at 1.5s behind.

In the Ducati paddock, Lorenzo is realistic with the change, and he tries to improve the Italian machine. The first practice sessions saw him in the fifth position, confident he can work something out in the race.

The other great surprise of the preseason testing is the MotoGP rookie Jonas Folger. Coming from Moto2, the Yamaha Tech 3 rider managed to get in the fourth position after the first practice session. Amazed by the new bike he says being a rookie helps him a lot because there’s no pressure, so he enjoys riding the bike.

Considering the current standings, the Spanish riders and the Moto2 newcomers will have a fight in the front row. More than that, it seems that this year we'll have again two Spaniards on the podium almost every round. Stay tuned for the Sunday race, the show is on.