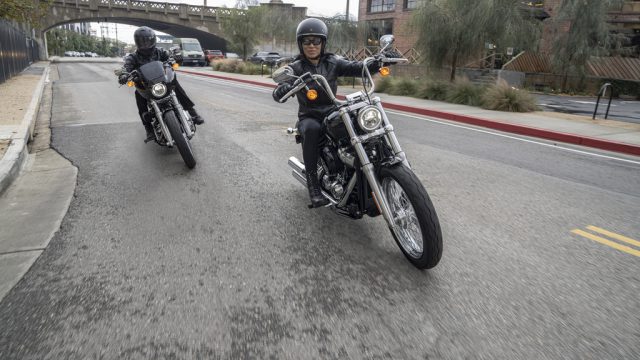 Harley-Davidson launched the Softail Standard which features a lean bobber design, the Harley-Davidson Softail chassis and the Milwaukee-Eight 107 V-Twin engine. Also, the motorcycles are fitted with the classic Vivid Black paint, chrome parts and polished finishes.

The Milwaukee-Eight 107 V-twin has 1,746cc. The advanced cylinder head design, dual knock sensors, and precision cooling offer a 10.0:1 compression ratio which helps the engine to deliver 149 Nm of torque and improve acceleration.

To reduce vibration, Harley-Davidson fitted the motorcycle with dual counter-balancers. Other upgrades include the four-valve cylinder heads which provide the sufficient airflow for the engine.

Harley-Davidson updated the steel frame which now is lighter and stiffer thanks to the rigid-mounted powertrain. Also, the Softail swingarm was designed to increase the stiffness level to improve the handling of the Softail Standard motorcycles.

On the front, Harley offers a dual bending valve fork which offers improved braking and handling performance for the bike.

On the rear, the Softail Standard models are fitted with mono-shock which has a coil-over shock placed under the seat.

The suspension has pre-load adjustment and the rider can change the setup by removing the seat. The ABS is optional on the Softail Standard motorcycles.

The Harley-Davidson Softail Standard models are available only in the Vivid Black colour scheme. Other features include chrome components such as the shields and mufflers, and models also have polished parts.

The bikes are fitted with a solo seat, chopped rear fender and an 11 litres fuel tank.

Another feature of the Softail Standard models is the 2-into-2 offset exhaust system.

The motorcycles feature steel wheels, 19-inch front and 16-inch in the rear, both with chrome finishes.

The Harley-Davidson Softail Standard models are equipped with an ape handlebar and riders can choose from four accessory packages.