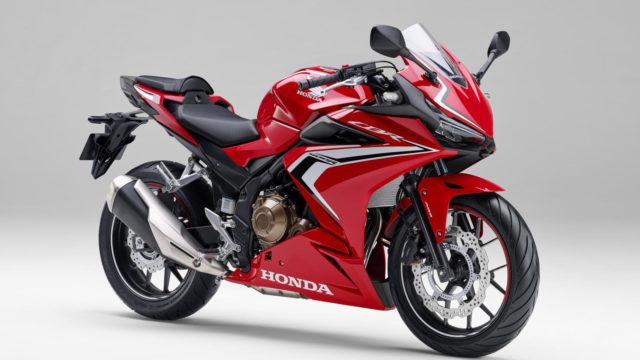 Honda unveiled the CBR400R model in Japan according to Indian Autos Blog. It comes only as a Japanese motorcycle market model and features a 399cc twin-cylinder engine making 46 HP at 9,000 rpm and 38 Nm of torque at 7,500 rpm.

The small sportbike segment has become quite popular in the last couple of years and includes models such as Yamaha R3, KTM RC 390, Kawasaki Ninja 400 or even the upcoming Kawasaki Ninja ZX-25R. So, the company released a 400cc bike just for the Japanese motorcycle market. The rest of the world will still have the CBR500R model.

The engine is the same as the recently launched CB400X adventure touring model which is a 399cc twin-cylinder engine making 46 HP at 9,000 rpm and 38 Nm of torque at 7,500 rpm. Moreover, the engine is equipped with Honda’s PGM-Fi fuel injection technology which helps the bike have better fuel efficiency. Also, Honda fitted a 6-speed gearbox.

The bodywork looks aggressive and reminds us of the CBR1000RR-R Fireblade design with the headlights and fairings lines. It seems that Honda targets new and younger customers with this small-displacement motorcycle and the bodyworks looks appealing enough thanks to the sculpted fuel tank, high tail section and dual-barrel side-mounted exhaust system which enhance the bike’s sporty look.

Other features include clip-on handlebars while the fuel tank has a capacity of 17-liters. Honda claims a range of up to 29 km per liter. It sounds appealing for an everyday bike and it would be interesting to find out the price tag, but unfortunately, there are no details regarding the cost.