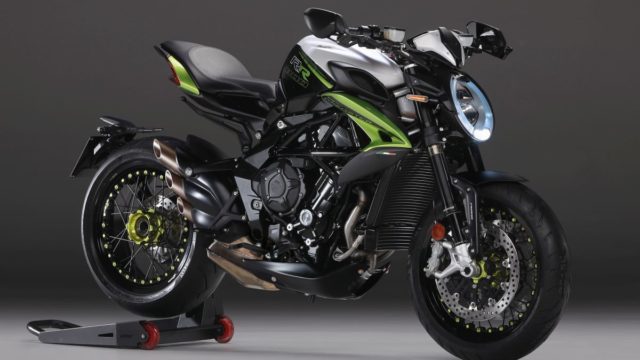 After we’ve seen the Smart Clutch System (SCS) fitted on the MV Agusta Turismo Veloce 800 Lusso SCS and Turismo Veloce 800 RC SCS models, now the Italian brand brings the system on its 2020 models, namely the Brutale 800 RR SCS, Dragster 800 RR SCS and Dragster 800 RC SCS. The S.C.S. 2.0 was developed by MV Agusta in collaboration with Rekluse and allows the rider to not use the clutch even when the bike stops for a red light and then accelerates again.

The Smart Clutch System helps the rider to upshift and downshift using the pedal control assisted by the EAS 2.1 bidirectional quickshifter. Also, the SCS automatically disengages when the bike is stationary meaning it’s not necessary to pull the clutch lever while stopping the motorcycle and also allows the rider to start again without having to use it. Thus, it enhances the riding comfort of the MV Agusta Brutale 800 RR SCS, Dragster 800 RR SCS and RC SCS versions. Moreover, the SCS 2.0 system does not add too much weight to the motorcycle considering it weighs just 30 grams more compared to a traditional clutch.

The engine is the same 798 cc three-cylinder with counter-rotating crankshaft and removable gearbox which makes 140 hp (103 kW) at 12,300 rpm and a maximum torque level of 87 Nm at 10,100 rpm. The engine is fitted on a trellis frame with ALS steel tubes while the single-sided swingarm is manufactured from aluminum alloy.

The electronics package is the same as the standard models, so the SCS versions feature electronic engine management with MVICS 2.0 and Eldor engine control unit which allows the rider to choose between four torque control maps. Other refinements include traction control with eight intervention levels. Unfortunately, the motorcycles lack any cornering ABS, but they are fitted with the latest generation ABS Bosch 9 Plus. Completing the package is are two radial four-piston calipers with 320mm brake discs on the front while on the rear MV Agusta fitted a two-piston caliper with a 220mm brake disc. Suspension wise, on the front MV Agusta fitted an upside-down telescopic hydraulic Marzocchi fork manufactured from DLC treated aluminium with anodized fork legs. It can be adjusted for rebound-compression damping and spring
preload. On the rear, the engineers equipped the bikes with progressive Sachs shock absorber with rebound, compression damping and spring preload adjustment. All these help the motorcycles to have a low dry weight – 175 kg in the case of the MV Agusta Brutale 800 RR SCS and 168 kg on the MV Agusta Dragster 800 RR SCS.