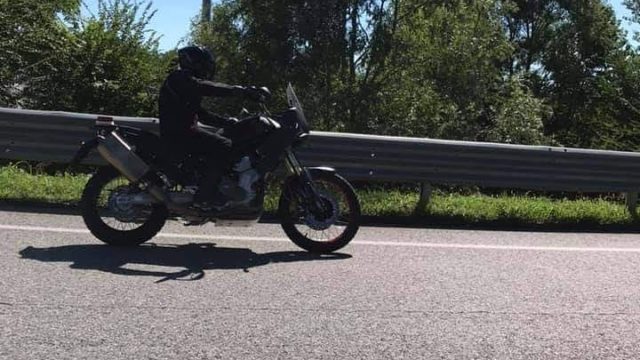 Aprilia is working on a middleweight adventure motorcycle as these leaked spy shots show. The bike has been seen in action during some tests and the pictures made their way on social media. We could be looking at the 2021 Aprilia Tuareg 660, a model based on the current RS 660 platform.

The Aprilia Tuareg 660 was presented as a concept bike last year at EICMA, but the adventure motorcycle was sitting behind some trees back then, so there wasn’t much to tell as the Italian brand most likely just wanted to give a slight glimpse of the future model thanks to the motorcycle spy photos. Now, we have a chance to see the bike in action during some tests.

The 2021 Aprilia Tuareg 660 features some design lines inspired from the Dakar Rally motorcycles. It looks like, the Italians are aiming at the main rivals in the adventure motorcycle segment like the Yamaha Tenere 700, probably the 800cc Honda Africa Twin (if the rumours become true), BMW F 850 GS and KTM 790 Adventure.

It looks like the Tuareg 660 will feature the parallel twin engine borrowed from the RS 660, but this time around, the maximum output could be less than 100 hp as the Italian brand might chose to increase the medium-low torque level. Even so, the power delivery should be enough to make the Aprilia Tuareg 660 a competitive model in the adventure motorcycle segment if the dry weight will sit between 175 and 190 kilos.

The bodywork is fitted with a fuel tank placed above the engine that does not go down to its sides, thus the maximum fuel capacity could be around 18 litres. Ergonomic wise, the riding position looks aimed to offer good offroad dynamics as the adventure motorcycle is equipped with a saddle which appears narrow and fitted pretty high (probably we’re looking at 870mm from the ground). The fairings are small in size while the turn of the collectors are fitted low like on rally raid motorcycles.

The Aprilia Tuareg 660 is equipped with a huge silencer indicating that the adventure motorcycle features an Euro 5 compliant engine. The upside-down fork looks to have been design to offer a long travel, probably 210mm and the long aluminium swingarm should provide a good level of stability and traction on offroad tracks. Also, the monoshock works on progressive leverage. Brake wise, the adventure motorcycle features double discs on the front with radial mount calipers.

The electronics package could feature ride by wire, engine maps, ABS and traction control. Nonetheless, the wheels feature a 21-inch rim on the front and 18-inch on the rear, perhaps fitted with tubeless tyres like on the concept bike showcased at EICMA 2019.

Taking all this into count, a couple of details still remain regarding the launch date which could be next year. Also, it’s interesting to find out how much the 2021 Aprilia Tuareg 660 will cost.