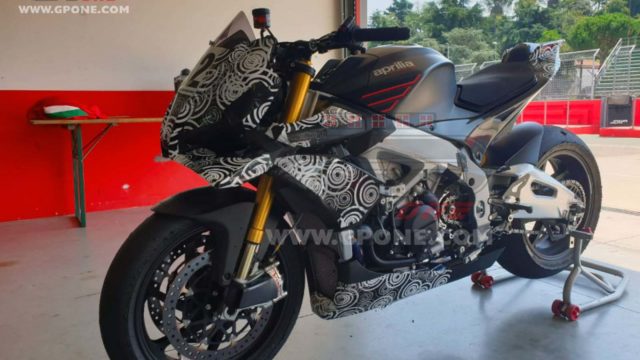 Next year we could see the 2021 Aprilia Tuono V4 1100 equipped with MotoGP winglets according to GPOne. The aerodynamic package could be introduced on the super naked motorcycle as it is already running some test on the Imola track where the bike is ridden by Lorenzo Savadori. Also, the Tuono could receive a power upgrade to 215 hp as the Aprilia Racing Department seems to be working on this matter as well. This could mean that the Noale brand is serious on tackling with its rivals such As Ducati Streetfighter V4 S and MV Agusta Brutale 1000 RR.

Even if GPOne spotted the super naked motorcycle during some tests it still is a question if the MotoGP winglets will be fitted on a street-legal version or just a track-focused motorcycle. Although other models in the segment already use winglets, namely Ducati and MV Agusta, Aprilia seems to have a different approach on this matter as the aerodynamic package looks directly borrowed from the MotoGP bike.

The motorcycle we see in the photos is packed with carbon fiber parts, lacks street components such as mirrors, headlights and turn signals. So, we could be looking at a track only version of the Tuono V4 1100 model. Moreover, rumour has it that the Aprilia Racing Department is tweaking the engine to deliver around 215 hp which is some serious upgrade from the 175 hp power delivery the current super naked motorcycle has.