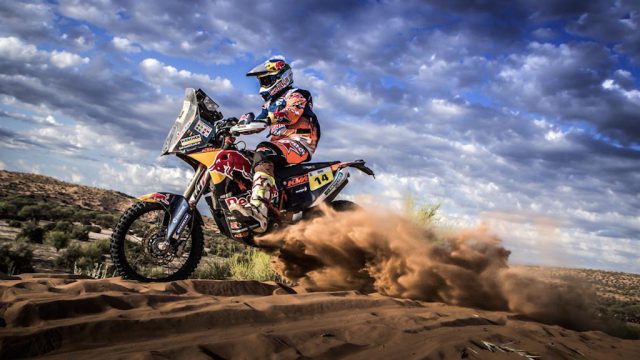 The favourite riders for the Dakar title

The Dakar Rally is the toughest off-road rally in the world, bringing together the best cross-country riders in the world. The 2018 edition starts on 6th January in Lima ,Peru and consists of 12 stages, which spread across 15 days of racing. The motorcycle rally is one of the most spectacular to watch when it comes to Dakar. From a list of 167 riders that signed up to take the start on 6th January, we’ve made a short list of the top contenders for this year's podium. With less than ten days before the start, now is a good time to pick your favourite.

The Red Bull KTM factory rider managed to put a victory under his belt at this year’s Dakar. He is the first British winner of the world’s toughest rally and is considered to be one of the most talented desert riders in the world. Sunderland rides a KTM 450 Rally Replica that helped him cross the finish line first with a time of 32h 06' 22’’. The competition is pretty tough this year but, James Sunderland remains one of the favourite riders for the title.

The Austrian KTM rider comes from the motocross world where he managed to become a champion. At the 2017 Dakar Walkner took the second place coming in 32 minutes behind his KTM  teammate Sunderland. He is one of the favourite riders for the 2018 Dakar with huge changes to win.

Farres managed to take the third place at the 2017 Dakar Rally. The Spanish rider crossed the finish line 35 minutes behind Sunderland. Although he is struggling due to an injured knee, he is determined to cross the line between the frontrunners. Farris will be riding on the back of a KTM 450 Rally, the same bike as the rest of last year’s podium finishers.

The Spanish Honda rider managed a fifth place at the 2017 Dakar. Unfortunately, Barreda got a one-hour penalty for illegal refuelling. Otherwise, he could take the first step on the podium. He shows great confidence for the 2018 Dakar and, he is satisfied with the changes made on his Honda CRF 450 Rally.

Paulo Goncalves is an experienced portuguese rider that made his debut in this competition back in 2006. He has a podium finish (2nd) in 2015 and 6th place in 2017. Goncalves managed to put his name between the top Dakar Competitors and, he might be up for the victory in 2018.

Van Beveren has a pretty interesting record in the Dakar competition. He first showed up in 2016 and took the 6th place. He managed to improve and, this year he arrived 4th with just 48 seconds behind the third finisher Gerard Farres. Hopefully, Van Beveren will improve even more for the 2018 round to catch a place on the podium with the help of his Yamaha WR450F Rally.

Toby Price is one of the riders you can’t miss. He is one of the greatest talents to take part in the Dakar 2018. The Australian rider is a natural born that managed to get a podium finish in his rookie’s year (3rd place in 2015). On his second year he won the 1st place, unfortunately, in 2017 disaster struck and Price broke his femur forcing him to quit. Hopefully, Toby Price still has the skills to put another win under his belt.