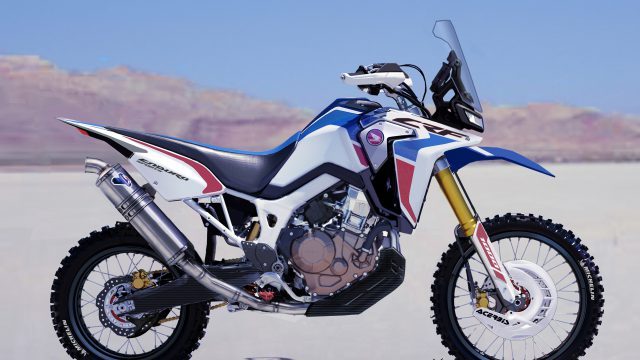 Rumor: Honda Africa Twin will get a bigger engine and several other updates

Everybody’s talking about a new Africa Twin set to be revealed for 2020: a bigger engine to comply the Euro 5 regulations, larger fuel tank, and other specs. Hopefully, this update won’t add too many kilograms.

The Africa Twin is about to get an engine displacement increase, from 998 cc to 1080 cc, that will bring an extra five horsepower and will get the bike in line with the new European emission standards. From 2020 on, every motorcycle must meet the Euro 5 regulations, and everyone must find a solution to comply the new rules without losing engine power. BMW’s choice, for example, was to increase the displacement and add the ShiftCam Technology and it seems that Honda will do the same thing – not sure about the V-TEC, though, [which is a pity because Honda invented the V-Tec in 1983 – it was introduced on the CBR400].

The news appeared on several media outlets, including Bennetts. And, according to them, it’s not just the engine to be updated. ITtseems that Africa Twin’s fuel tank will get bigger – from 18 to 20 liters for the standard version. Also, there’s a talk that the DCT is to be improved.

More than that, it is said that the Africa Twin will get an all new dash – a TFT this time and keyless ignition. Nothing about the cruise control and the tubeless tires, though.

The key to success

When it was launched, back in 2016, Africa Twin came with the “True Adventure” promise. It was built around the NXR750 legend and it was one of the most anticipated motorcycles of its time. No riding modes back then, no expensive electronics, it was just a simple motorcycle to be ridden around the world. The situation changed for 2018, when Honda introduced a throttle by wire with four riding modes and a seven-level traction control setting. More than that, they came with the more massive “Adventure Sports” version. And it still had a lot of success, being one of the most wanted adventure bikes on the market, right behind the R1200GS.

Africa Twin had a smart way of market positioning. It was smaller and less expensive than the R1200GS and the KTM 1290, but bigger and more comfortable than the middle-weights such as the F800GS and Triumph Tiger 800. It was a great choice for those looking for an adventure bike. The only motorcycle matching its specs was the KTM 1050 (now 1090). But the market has evolved: BMW unveiled the F850GS, Triumph updated the Tiger and KTM came up with the 790 Adventure. All three of them with the same claimed horsepower figure – 95 hp. However, in our comparison test, the Africa Twin was faster than the F850GS and the Tiger – on every type of terrain. And we had the “Adventure Sports” version – the heaviest motorcycle out there.

But Honda wants more, and it will probably add up more horsepower, as stated above. The bike in the photos above is a render made by a Japanese magazine, but we don’t think that the Africa Twin will borrow the sporty headlights. On the other hand, it would be a nice thing to look like the one in the main photo (or the one in the photo below this paragraph) – which is the Enduro Sports Concept, created by Honda's R&D Designers. We’re expecting it to look almost the same, with no big changes to the chassis either. And why should they change it? It rides amazingly. But there’s a thing that every adventure rider hates about the new adventure bike – the weight. Every update comes with some extra kilos. So we’re hoping Honda will pay attention to that. And release a smaller Africa Twin, around 750 cc  – maybe an all-new TransAlp. But that’s a different discussion.