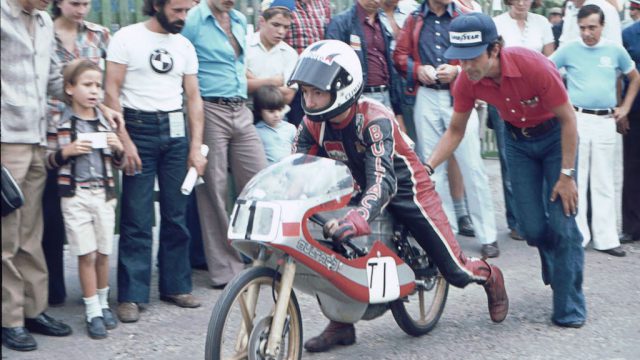 After losing John Surtees and Nicky Hayden, it’s not been a good year for our former heroes.

Spain’s 13-times World Champion and so-called ‘king of the tiddlers’ Ángel Nieto passed away on August 3 from head injuries he’d sustained in a road traffic accident one week earlier when riding a quad bike on the holiday island of Ibiza. He was hit from behind by a car and was understood not to be wearing a helmet when his head struck the ground. He was 70 years old.

Nieto dominated small-capacity Grand Prix racing for two decades, winning a remarkable 90 GP races and taking 139 podiums en route to his 13 World crowns – or ‘12 + 1’ as he superstitiously insisted on terming his title tally. Six 50cc World Championships and seven in the 125cc class between 1969 and 1984 riding Derbi, Bultaco, Garelli, Minarelli and Van Veen Kreidler two-stroke machinery also made him the rider to have won World titles with most different manufacturers. Additionally, he won Spanish National Championships in the 50cc, 125cc, 250cc, 500cc and 750cc classes, establishing himself as a living legend whose earthy personality displayed in TV race commentaries and talk shows brought him a charismatic fame extending beyond the motorcycle community, even after retiring from racing in 1986.

Ángel Nieto later became a team manager, winning the 1999 125cc World Championship with rider Emilio Alzamora – today the personal manager of Marc and Alex Márquez. His sons Pablo Nieto and Ángel Nieto Jnr. and nephew Fonsi Nieto all followed him into GP competition, too, though with lesser success. But the Nieto name remains synonymous with Spanish motorcycle racing, and as Spain’s first-ever World champion as well as it's most successful, ‘El 12 + 1’ played a key role in bringing about his country’s current dominance of Grand Prix road racing. He will indeed be missed.