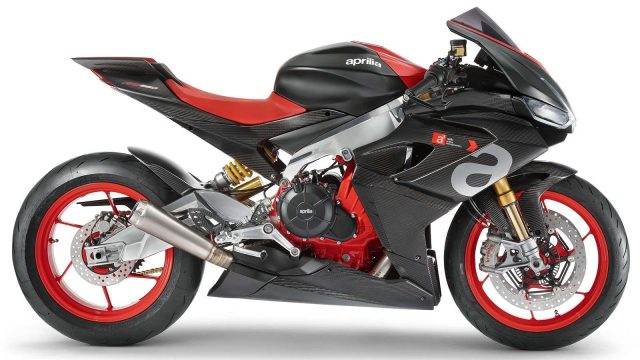 The Italian manufacturer teased us with a supersport concept at Eicma. The RS 660 is one of the most eye appealing bikes ever made by Aprilia and the news is incredible, since the 600cc sports bike offer is getting smaller by the year.

Here's our video of the Aprilia RS 660 concept, you can watch it in the window below or directly on our

Who would have thought Aprilia could ever consider building a 600cc bike? Oh well, the RS 660 concept is a clear sign that in a year or two the Italians will come up with a new middle-weight racer for their line-up. The bike screams power and features something that we see only in Formula 1- an active aerodynamics system. This system consists of a full set of MotoGP looking winglets that go along both sides of the bike. There’s a clear resemblance between the RS 660 concept and the big RSV4 but, this time everything is a bit narrower and somehow cooler. Maybe because of the colour scheme, the concept was a pleasure to stare at.

The numbers are looking very good for the RS 660 and the power to weight to ratio is very attractive. The engine is set to be half of the 1100cc powerplant that will fit the new RSV4 1100 Factory and, it produces around 105hp with a weight of 160kg. So if you ever thought that a twin cylinder engine might not be enough to fight with the four-cylinder supersports on the market, the RS 660 might prove you’re wrong.

The electronics package for the concept comes in a very long list with the mandatory ABS, Traction control, a TFT dash and many more. Unfortunately, this is only a concept and, we don’t have anything certain from Aprilia but, we intend to think a series version will be presented by the Noale manufacturer next year at Eicma.