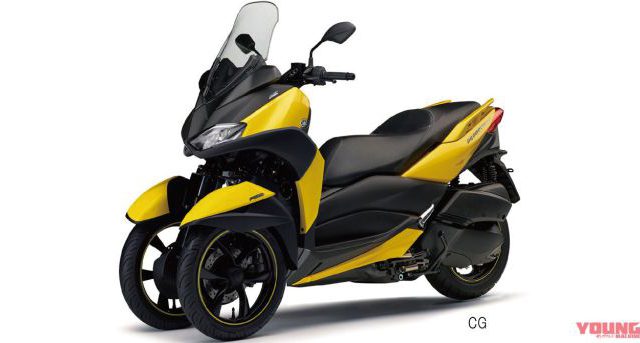 Japanese magazine Young Machine has published a CG render of what’s thought to be the next incarnation in the Tricity scooter line-up, allegedly the 300cc version. And since YM has been right on more than a handful of occasions, we guess this thing is coming indeed.

However, it’s not at all sure if the Tricity 300 is a treat reserved for the Japanese market solely, or it will spread to other markets, as well. Yamaha’s previous Tricity machines, the 125 and 155 sold in decent volumes, so adding more scooters to the fleet seems like a natural follow-up for Iwata.

Young Machine believes that the 300 model is the three-wheeled version of the XMax 300. In a way, it only makes sense to see Yamaha delivering slightly bigger engines to the North American and European markets, as is accustomed. Staying on the speculative side of the industry, we reckon that the 28 hp Tricity 300 is quite a feasible idea, whereas its even bigger sibling derived from the XMax 400 could also show up with 33 hp.

If anything, there already are a lot of small-displacement bikes and scooters that have been initially released in Japan with, say, 250cc engines, later to be upgraded to the 300cc spec prior to having them sold in the Western markets. So we’d take it that we MIGHT indeed see scooters like the Tricity 300 announced at the Tokyo Motor Show this October.