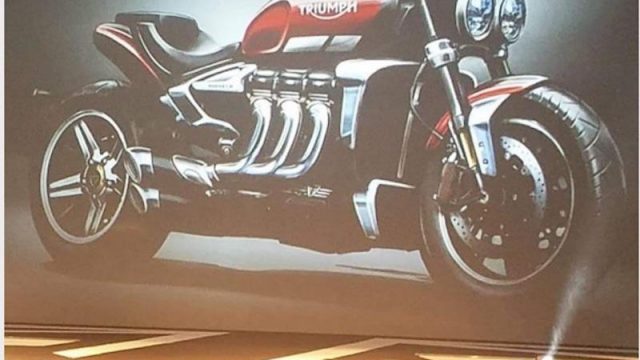 2,500 cc and huge torque! Ducati Diavel, watch your back

Triumph is set to release a brand new Rocket III this year that will feature sky-high power and torque figures. A test unit was already presented to Triumph’s dealers at the annual conference back in October 2018 and we have to admit the new Rocket is a badass power cruiser.

The British manufacturer is not resting even for a bit. After adding up a lot of models to its Modern Classics range, now they are bringing back the iconic Rocket with a slightly bigger engine and an astonishing torque figure. Instead of 2300cc the displacement was raised to 2500cc and the power figure is more than 180hp. The new power plant will most probably Euro 5 compliant while the torque might be greater than 230 Nm. By the way, this is more than a lot of cars on the market.

Everybody remembers the Triumph Rocket III, it's that big and grumpy cruiser that can pull a power wheelie. It was launched back in 2004 and it produced around 145 hp from a 2.3 triple-cylinder engine that delivered a torque figure close to a 2.0 litre diesel car. Unfortunately, the bike didn’t have the success Triumph hoped for in the U.S., but it sure made some people fall in love.

This time the Rocket III comes with retro-modern looks inspired by other Triumph bikes. The gas tank has the Bonneville looks, while the round headlights bring it closer to the Speed Triple. Both front and rear wheels are completely new while the radial-mounted callipers make it scream performance.

There will be no shortage of electronics systems to help tame the beast. The new Rocket III will feature all the latest technology in terms of rider aids and we are more than sure that Triumph is set to fit it with an LCD dash and LED lights. It will probably get a set of electronically adjustable suspension system and anti-wheelie to keep the front end from lifting.

The main rival for the Triumph Rocket III is the Ducati Diavel but, judging only by the specs the Ducati doesn't stand a chance in this heavyweight battle. Fortunately, we will get to see the new Rocket III this fall at the Milan show.