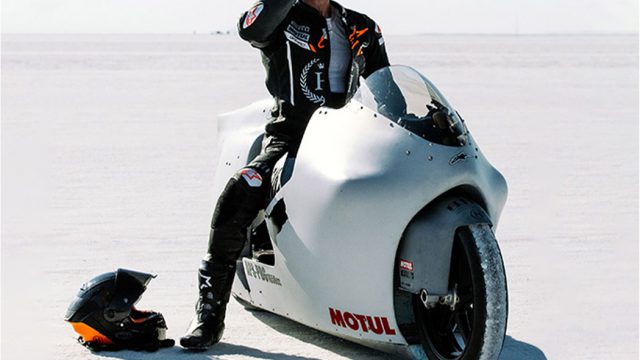 The man behind this project is Max Hazan, one of the world’s most famous custom bike designers. What we’re looking at is the Motus MST Salt Shaker which is a land racing bike with a 1,650cc pushrod V4. Adding a Garrett GT28R turbocharger pushes the output between 250-270hp.

The Los Angeles-based designer built this bike with the help of Bobby Haas of Dallas’ Haas Moto Museum. It was designed to race at the Bonneville salt flats.

Motus MST Salt Shaker was manufactured around a fully-custom frame. The bodywork features a partial streamliner and looks like it was inspired by a fighter jet. Underneath the fairings sits a 1,650cc pushrod V4 picked from a Motus Motorcycles’ MST model. In order to become a land speed record machine, Hazan added a Garrett GT28R turbocharger to push the power delivery from 180 hp in stock trim to between 250-270hp.

To keep the front wheel on the ground and to help the rear tire grip, the Salt Shaker was fitted with 150 lbs (68kg) to increase the traction level and make it more stable at high speed. The overall bike weight stands at 635 lbs (288kg).

It looks radical and we would like to know what top speed the Motus MST Salt Shaker can reach. We know that the stock 180hp Motus MST bike can reach a claimed top speed of 168.69mph (271.48kph).