BMW Motorrad unveiled a new concept at this year’s Concorso d’Eleganza Villa d’Este - the Concept 9cento. It’s an “Adventure Sports” motorcycle (such as the S1000XR), but it’s powered by a parallel twin. And since 9cento means “nine hundred” in Italian, we’re believe that this is a preview of an upcoming series model to be named F900XR.

Of course, there’s nothing official from BMW Motorrad. But there are a lot of elements to solve this puzzle. 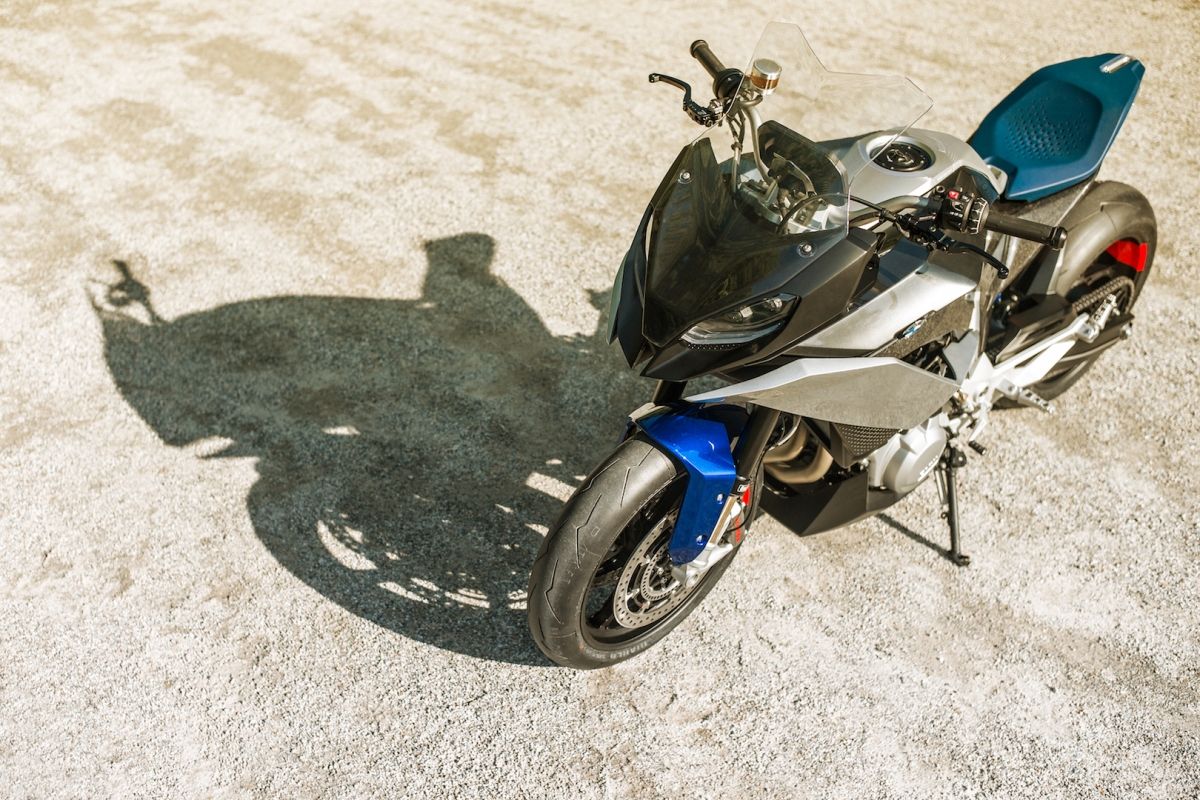 Almost every concept presented at the Concorso d’Eleganza Villa d’Este - except the R5 Hommage - was transformed to a series model. Take the R nineT and the K1600B Bagger for example. This precedent and an obvious gap in the BMW line-up suggest that the 9Cento is not just a designer’s concept for the BMW Welt museum. It will hit the market soon - not sure it will happen next year, but it’s close. 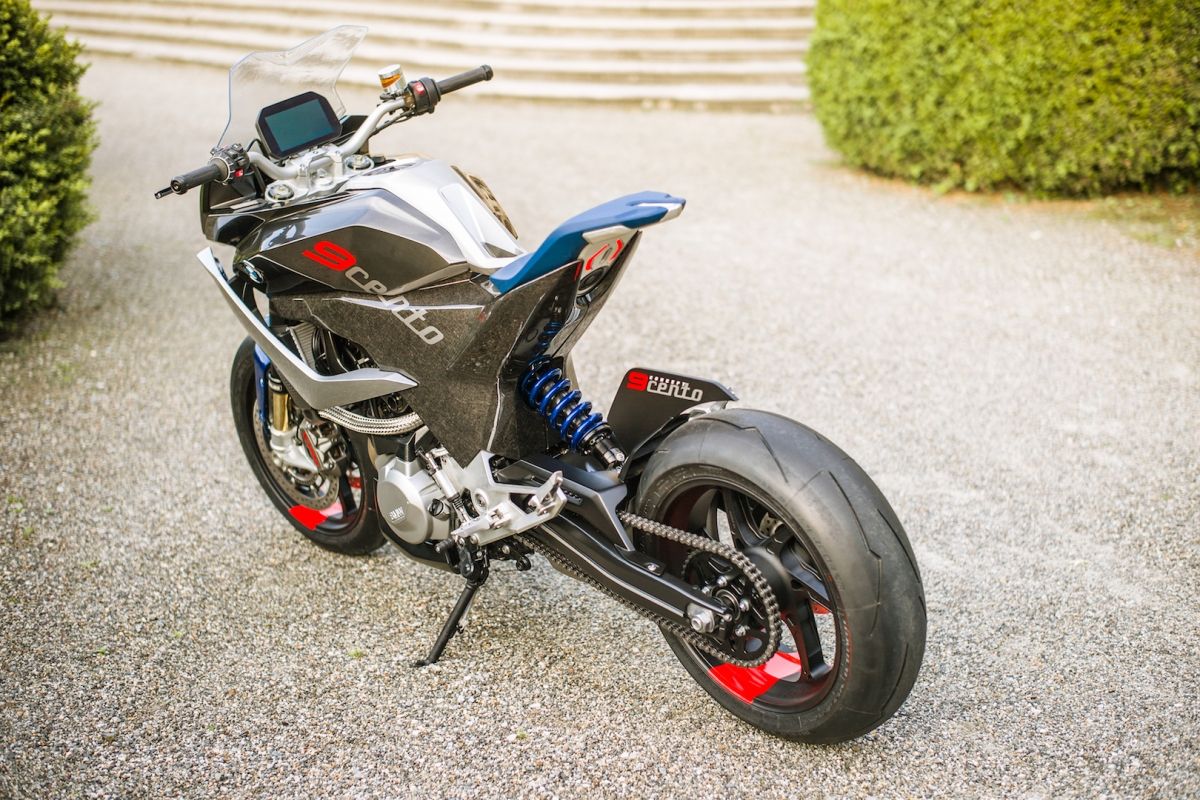 "We've created a bike that combines the appropriate power with reliable sports touring properties and above all lots of riding fun, so it's an attractive overall package. It brings together the best of the sports, adventure and touring segments to produce an exciting concept – in a class which has not seen this kind of model from BMW before. The BMW Motorrad Concept 9cento is our interpretation of a modern all-rounder for the new mid-range segment."

Why F900XR? A rival for the Tracer and Multistrada 950

The parallel twin comes from the F850GS project. But this time BMW could tune up the engine to develop more power than the adventure model and to become a direct rival for the successful Yamaha Tracer and for the Multistrada 950. What’s the point to create a 95 hp sport touring when the benchmark is higher. And what’s the point to name it F850XR when Tracer is a 900 and Multistrada is a 950. And judging by the concept name - 9cento - “nine hundred” we believe that BMW’s series-production middleweight adventure will be named F900XR. 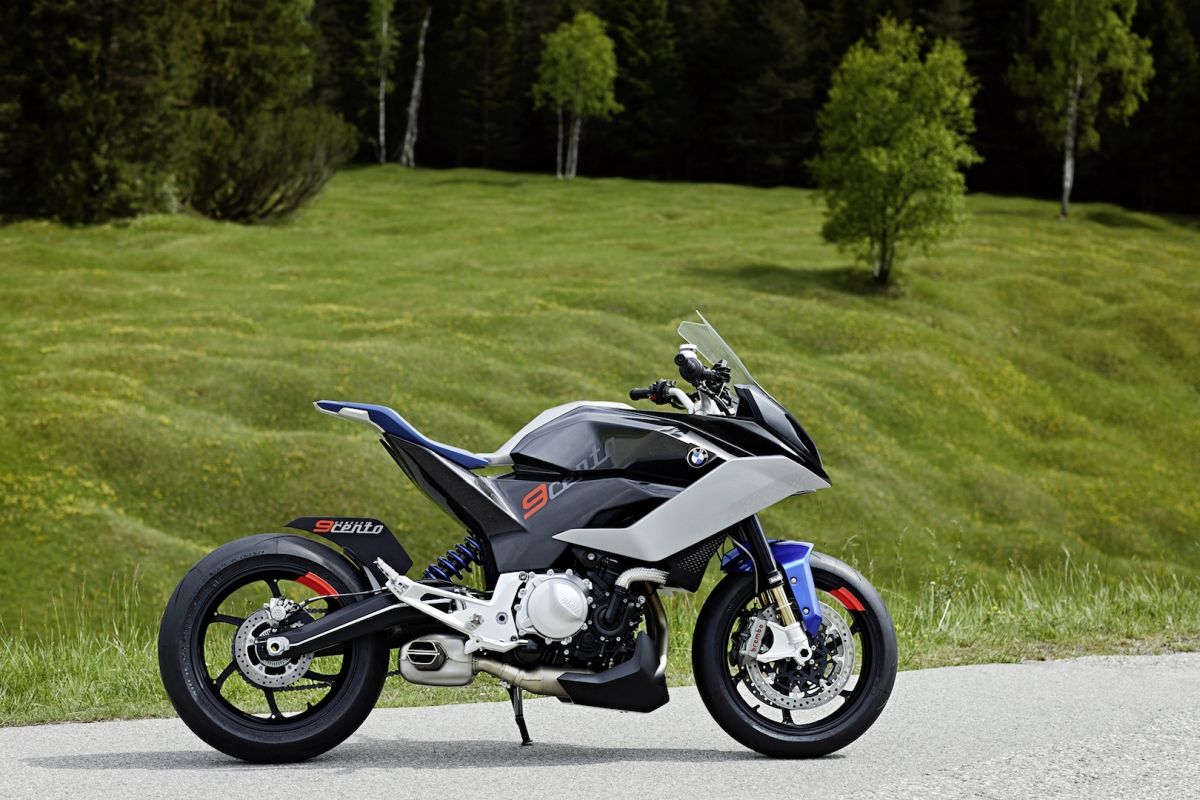 Another interesting paragraph from BMW’s press release: "The suspension is designed to be ideal for touring. A long spring travel ensures ride comfort and gives the bike a sense of light-footedness. Meanwhile the windshield and fairing ensure excellent wind and weather protection. The ergonomic controls and relatively low, upright seating position are two additional key factors that contribute to perfect riding fun over long distances." 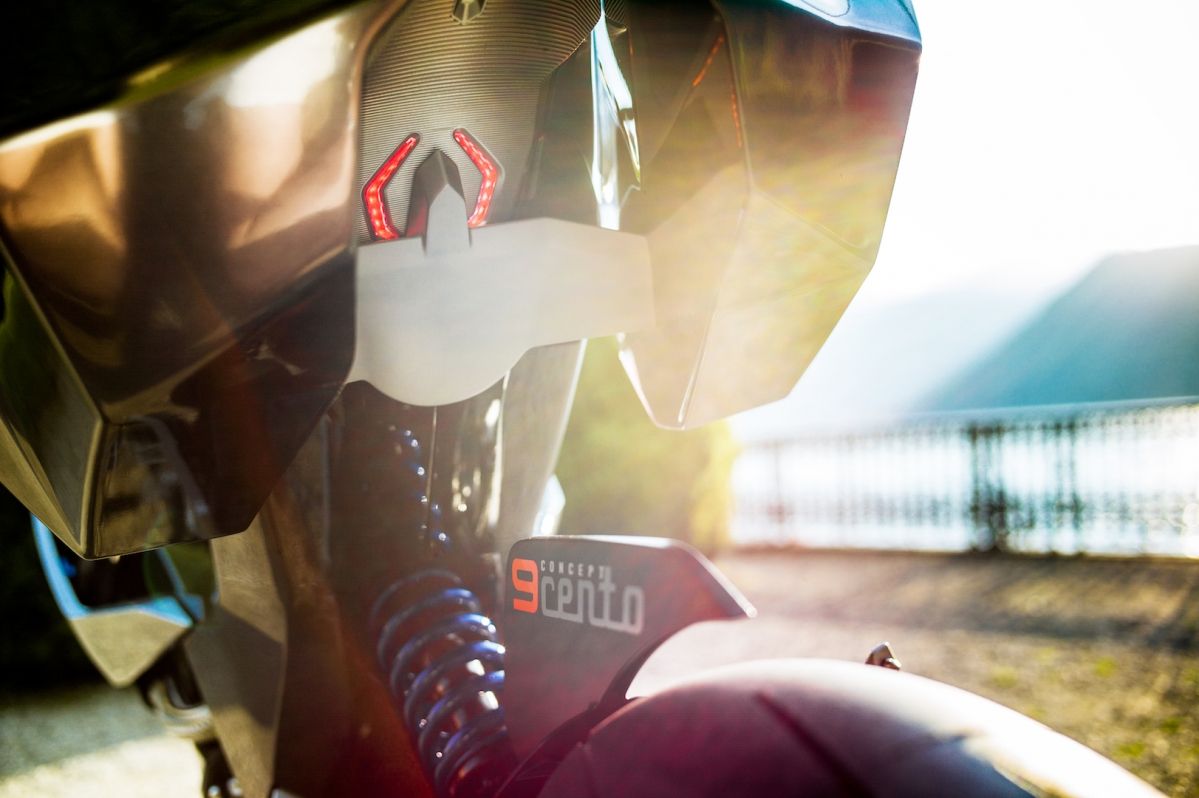 We’re not sure how they will look on the F900XR series versions, but we’re talking about some very interesting ideas, so we’ll share the press release information:

The frame triangle of the BMW Motorrad Concept 9cento is reinforced with CFRP fleece: it not only reduces the bike's overall weight but also links the three-dimensional design of the front trim to the aluminium rear carrier. The latter is milled and likewise geared consistently to weight reduction, consisting solely of the required support structure. The visible opening between the frame triangle and seat further highlights the lightweight construction principle. 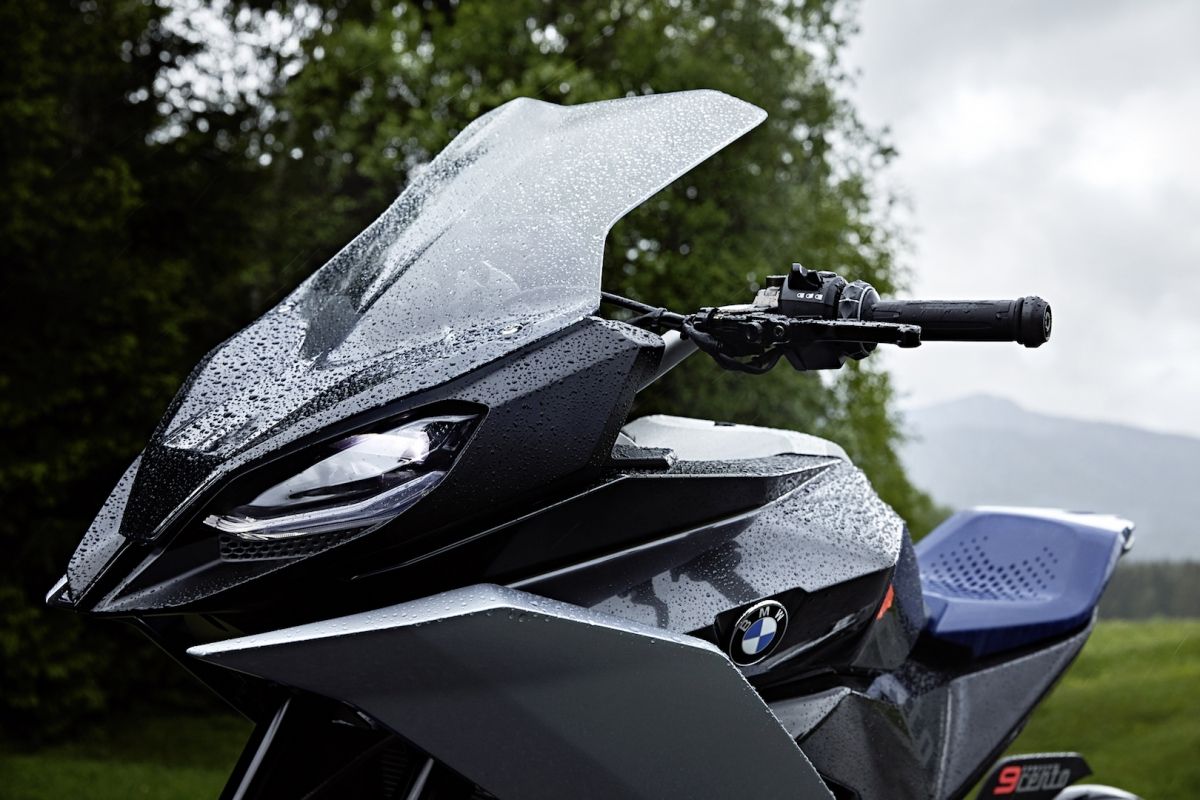 One particular highlight of the BMW Motorrad Concept 9cento is the innovative storage space concept comprising a clip-on case element. The double case not only offers storage space, it also extends the seating area for the passenger. It is hooked into the rear carrier from above if required, and there is a powerful electromagnet that attaches the element securely to the lower section of the rear carrier. This system makes it possible to have two functional versions of the same bike. 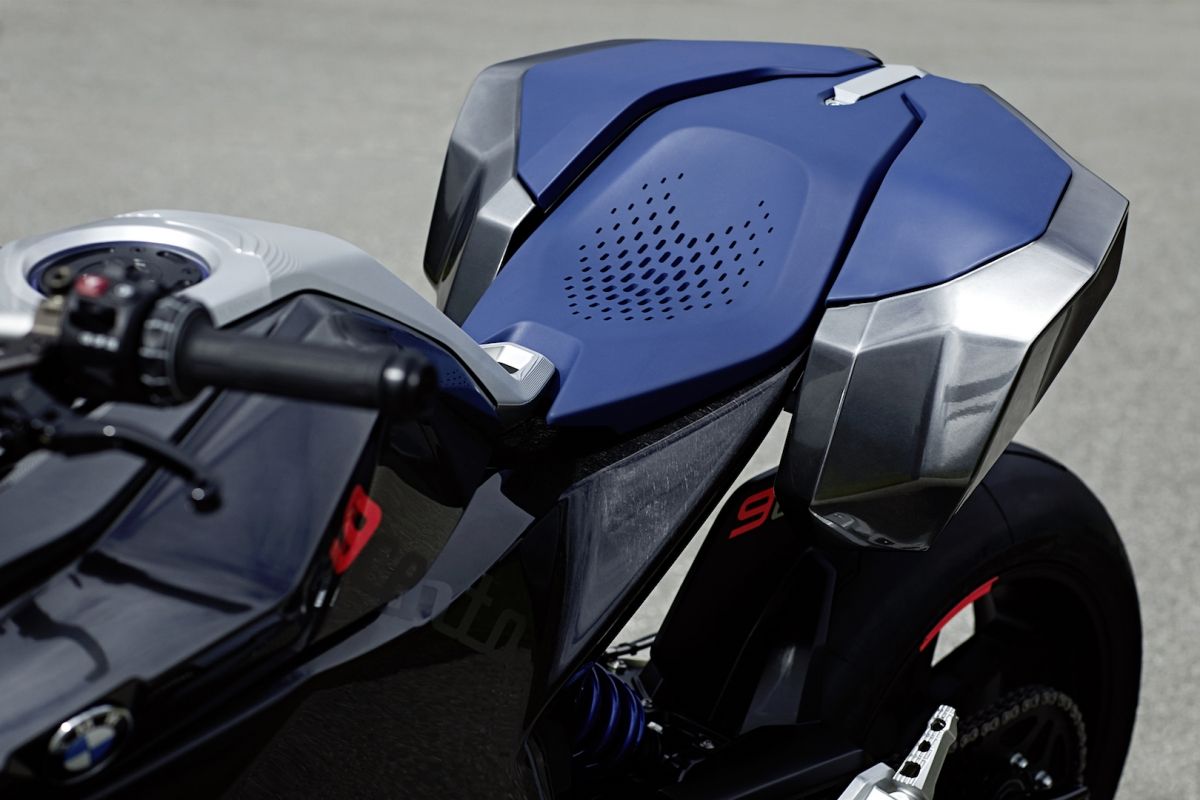 Without a case, the BMW Motorrad Concept 9cento has maximum agility and perfectly meets the rider's needs in terms of riding fun; with the cases, the concept bike is transformed into a touring motorcycle that is also well equipped to carry two people. The case system is harmoniously integrated in the concept bike's styling, reflecting the high-quality, holistic approach of BMW Motorrad design.

Two motorcycling jackets have been developed to go with the BMW Motorrad Concept 9cento. They each reflect the concept bike's properties with their refined mixture of leather and Kevlar fabric: Sport and Touring. 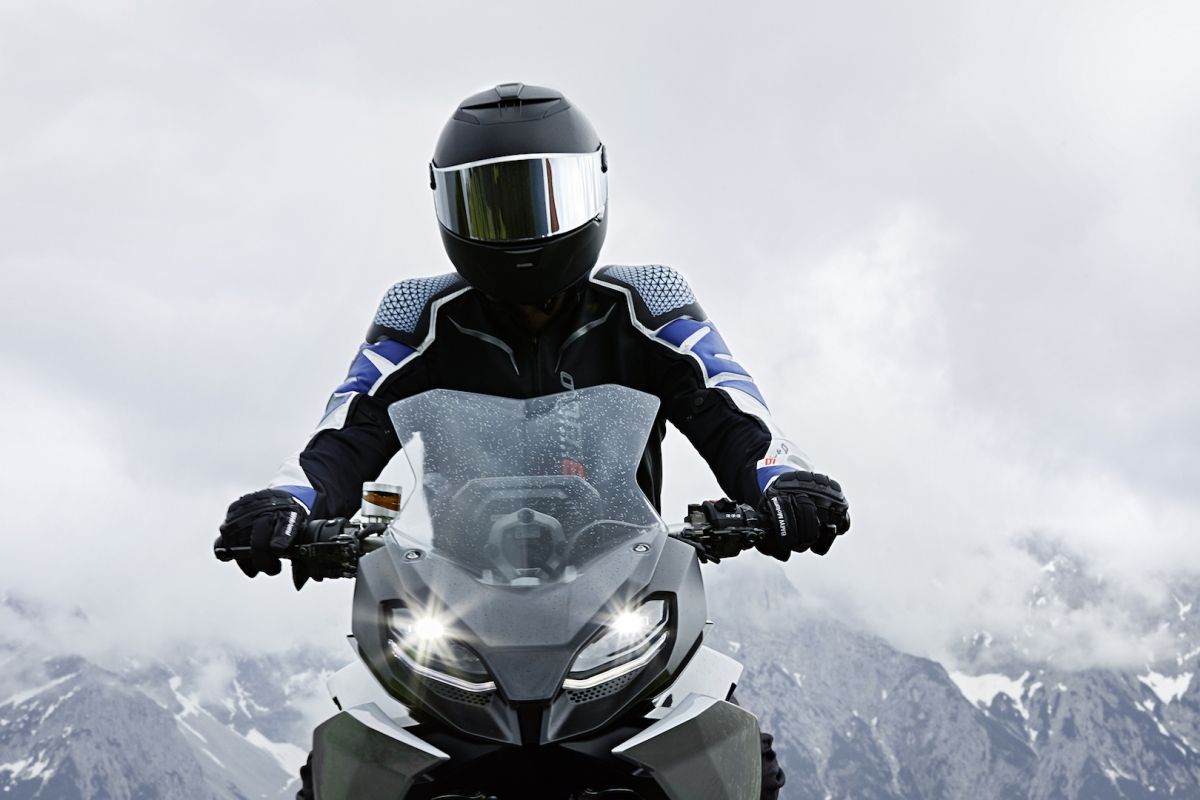 The sporty version features striking colouring in black, blue and white. The protectors integrated in the shoulders are particularly prominent. They are produced by means of 3D printing. The second jacket is light grey and reflects a style geared more towards urban chic, featuring a very soft leather with a high-quality feel.