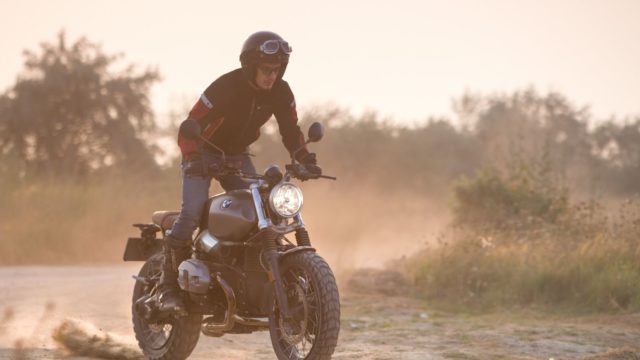 It looks like a badass dirt racer dressed in a Savile Row smoking. But is it cool enough to ride it hard off the beaten track? We put the new BMW R nineT Scrambler in the place where a bike named Scrambler belongs.

The old school Scramblers were street bikes with high mufflers and long-travel suspensions, capable to take you anywhere. It was the era when Steve McQueen used to ride his Triumphs and Husqvarnas over the hills wearing some chinos and a sweater. But those days are gone and the new Scrambler are usually ridden in the city by long-beard guys in gingham shirts.

The new R nineT Scrambler is a R nineT with a Scrambler …attitude. It has a different fork (more travel than the one on the original nineT), different handlebar, a high-positioned exhaust and dual sport wheels and tires. The spoked wheels are borrowed from the R 1200 GS Adventure and come as an option (€400).

Our test is a world premiere. Just a week after the international media launch (where we also joined the club), we had the new BMW Scrambler in our test-ride garage, so this is the first R nineT original movie you’re gonna see.

The nineT Scrambler looked so beautiful than we  fell in love without even turning on the ignition. But just like the boots are made for walking, the bikes are made for having fun, not for staring at them. So we took our performance-bike test rider, we gave him a pair of motocross boots and we sent him in search of sunrise. Enjoy the movie.

Some facts: 110 hp air-cooled boxer engine, switchable ABS and Traction Control, 220 kg (485 lbs) wet weight. The R nineT Scrambler will be available in the USA starting Q3 of 2016. The price was not announced yet. Starting price in Europe: €12,600