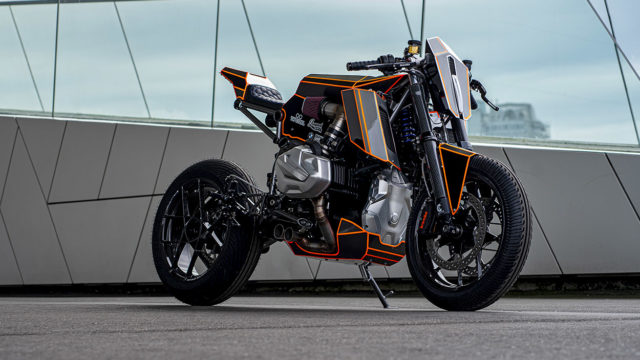 Arjan van den Boom from Ironwood Custom Motorcycles is the man behind this custom made BMW R1250GS which was transformed from an adventure motorcycle to a cafe racer according to BikeExif. It still has the ShiftCam boxer engine, but this time around it features a couple of suspension tweaks, upgraded brakes, 17-inch carbon fibre wheels and a lot of special parts.

This custom motorcycle project started as a commission by watchmaker TW Steel and was built to celebrate BMW Motorrad Netherlands dealership’s ten years sales success on the Dutch motorcycle market. So, Arjan van den Boom began to sketch how the BMW R1250GS would look like if it was stripped down to the bare essentials.

“We all had the same vision, to create an extraordinary custom bike and matching timepiece, to align with BMW’s ‘decade of dominance’. We would craft the motorcycle while TW Steel developed the watch. The ‘Dominator’ was conceived,” said Arjan.

The Ironwood BMW R1250GS still features the liquid-cooled boxer engine making 134 hp and 143 Nm of torque, equipped, of course, with ShiftCam tech. There are no details if the boxer engine had any power upgrades.

Arjan van den Boom needed some help while building the new lines of the bodywork, so he received some assistance from his friend, Marcel van der Stelt from Custom Factory. Thus, they’ve manufactured the angular body panels, a new fuel tank while Marcel helped with relocating the large-sized fuel pump. The result is a radical bodywork featuring a futuristic headlight, layered side panels and a new tail unit. Moreover, the headlights come from a BMW S1000XR and the rear lights from an S1000RR. The TFT dash was moved on the top of the fuel tank. All this process took over 100 hours of work to complete.

Furthermore, the exhaust system is new and was reshaped to fit under the engine. Ironwood manufactured new intakes and added custom-etched filters from DNA Performance.

Suspension wise, the BMW Telelever system was kept, but it was also upgraded swapping the fork tubes for a set of carbon fibre sleeves from CeraCarbon. Moreover, the front end was lowered by adding TFX Suspension shocks.

The Ironwood BMW R1250GS received 17-inch forged carbon Rotobox wheels (front and rear) while the rear tire measurement was increased from 170 to 190 and wrapped in Metzeler Racetec RR tires.

Also, the braking system was upgraded with Brembo callipers borrowed from an R1250R model. Other features include a new subframe and BMW R nineT rear-set brackets, Magura controls all finished up with a bright orange paint scheme from Royal Kustom Works.

Nonetheless, the Ironwood BMW R1250GS was fitted with a TW Steel watch. We have to say this custom motorcycle looks awesome and hard to believe how a big adventure bike was transformed into a cafe racer.