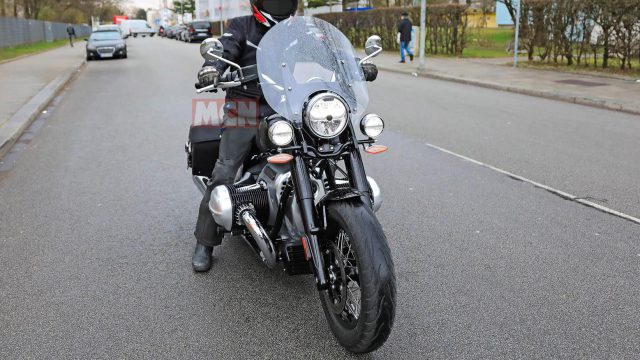 The big boxer cruiser is getting ready for production

The BMW R18 has been spotted making some tests according to these spy-pictures from MCN. The bike looks raw and with a clear aim to take on Harley-Davidson.

We can see that the bike has a tall screen fitted on the large forks, high handlebars and a classic dash which includes a display. Compared to the concept model, the spy-pictures tell us that the production version of the R18 could have 2 additional headlights next to the main one. The turning lights are large and appear to be designed for the US market.

Moreover, the bike features a passenger seat and the rear fender is larger from the one fitted on the concept. The R18 in the pictures has a 16-inch spoked front wheel with large Michelin Commander 3 tires.

The dash shows the top speed set at 200 kph and the small LCD integrated into the analogue clock has the word “rock” written. This could suggest that the BMW R18 will have an infotainment system which allows the rider to choose what type of music he wants to listen to. Or it could mean that one of the ridding modes is named “rock” to appeal more for the US motorcycle market.

The bike was fitted with side cases and it seems BMW is using a raw design without any chromed finishes.

It’s not the first time a BMW R18 bike appeared in spy shots as we’ve seen that the German brand is working on a touring version as well. Also, some patents were leaked on the Internet and a launch date was set for the BMW R18 cruiser on April 3.