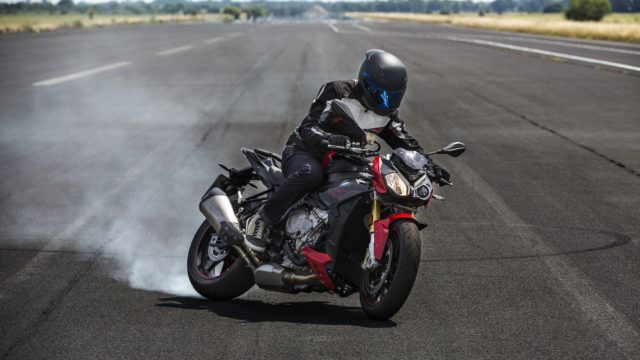 Adapting to Euro 4 requirements is not the only change BMW made to its models. BMW Motorrad division has updated and refined the S 1000 R, S 1000 RR and S 1000 XR for 2017. One of the best news is that BMW solved the XR’s annoying vibrations.

The S 1000 XR was launched in 2014. It was fitted with a very capable engine, but it had a big issue concerning the vibrations that diffused in the riders hands trough the handlebar. When we test the former model we were highly impressed by its performance, and we saw the potential of becoming a market leader, but the uncomfortable vibes made us take a step back. Now BMW took the decision of solving this problem for the 2017 model. An optimized vibration free handlebar will be fitted. The new XR will also be more powerful, 165 HP [ 121 KW ] peak power and will offer an increase of 10 kg in the maximum permissible weight. There will also be new options available for the 2017 XR.

The performance roadster S 1000 R was also revised and improved. It was aligned with Euro 4 regulations and got 165 Hp [ 121 KW ], five more than the previous model. A few changes were made in the comfort area: 2 kg weight cut, vibration-free handlebar, lighter rear section frame. The fairing will be considerably smaller, and a new color variant will be available for the 2017 model. The options area is filled with new add-ons for the S 1000 R.  From light forged HP wheels to the ABS Pro and even the HP Shift Assistant Pro quick shifter are now available for the new model.

The BMW superbike was a total hit since it was launched back in 2009. A few years ago, BMW introduced the second generation, which has received this 2017 small update. The power output remains the same – 199 HP [146 KW] but the torque was electronically optimised and now it has moved closer to the mid range. The peak of 113 Nm was at 13500 rpm. Now it can be reached at 10,500 rpm. The riding modes will be same with more refined electronic settings in the racing area. The optional ABS Pro and Dynamic Traction control are better enhanced for greater performance. Concerning the looks, the new RR will come with a cover for the passenger seat and with a more varied color range.