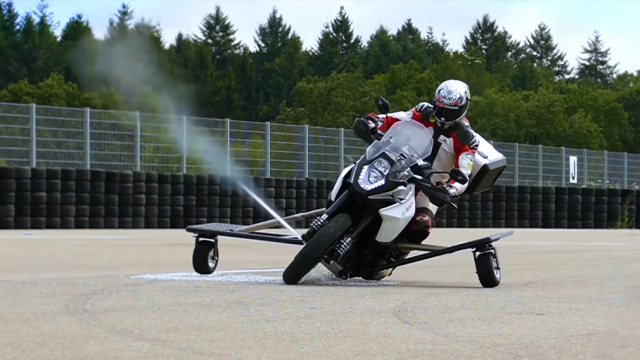 ABS and safety gurus Bosch are testing a new anti-slide technology that’s supposed to help riders retain control of the bike when hitting a gravel or an oil patch. The system is inspired from the technology that helps astronauts steer space shuttles in cosmos.

Namely, Bosh developed a system that uses gas thrusters to push in the opposite direction of the falling bike. The force of the pressurized gas should be strong enough to counteract the sliding wheel, helping the rider stabilize the bike and avoiding a lowside crash. The trigger is a combination of lean angle sensors and ABS analysis, and its action is almost instantaneous.

The video below shows that Bosch’ innovation can already be installed on motorcycles, and it also seems to work. Not 100% sure the rider would have avoided a lowside had there not been the auxiliary wheels, but the improvement is undeniable. If anything, only the lower part of the trainer wheel assembly seems to barely touch the tarmac, and that’s quite a strong proof that there may be a future to this technology.

So far, the system has a downside, and that’s one-off usage. That is, the Bosch gas-repulsion system only works once before needing replacement, much like airbags. The German company has yet to find a way to make the system reusable, at least to the extent some rider airbags are. If an air bladder is not perforated during a crash, reinstalling a CO2 cartridge and rearming the system makes it ready for use once more. If they can replicate this modus operandi, things could be much more useful and viable from a consumer’s perspective.

Still, with this new technology in the prototyping stage, there is much room for improvement until Bosch will be ready to roll out a commercial, budget-friendly version. And if the bulk it adds to the bike is also (close to) insignificant, we might just get to see rocket stabilizers on motorcycles. Never say never, remember?