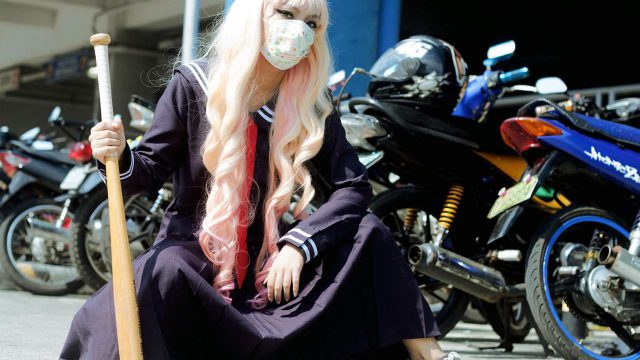 “I didn’t just want to sit behind a guy rider”

The Bosozoku Biker Girl Gangs are outlaws. They express their opinion about the system with violence, smashing car windows and the first members used to be former kamikaze pilots. Their bikes are flashy and very noisy and most of the times chased by police.

They used to be the girlfriends of Bosozoku men, but they got tired to sit behind and started their style as far as motorcycles and fashion goes. The term for involving women riders into the group is called kyushakai. The gangs are from Japan and some say they are associated with Yakuza, the famous crime gangs we sometimes hear in the news or Hollywood movies. 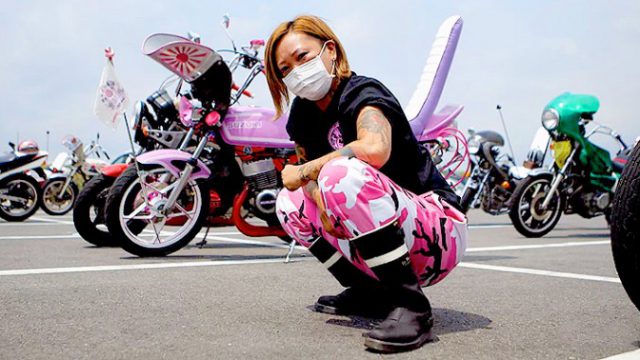 “When I was 16, I was dating Bōsōzoku guys. I thought the bike was so cool. I didn’t just want to sit behind a guy rider. Women are becoming stronger now,” says one of them.

According to DangerousMinds, “Back in the 1970s the term bōsōzoku (meaning “speed tribes”) was first used to describe Japanese biker gangs that routinely fought in the streets with rival gangs and the police. Often dressed like Kamikaze pilots, they wreaked havoc speeding through the streets on their illegally modified bikes, blowing through red lights, and smashing the car windows of any motorist that dared defy them with baseball bats. Foreigners were an especially favourite target of their aggression.” 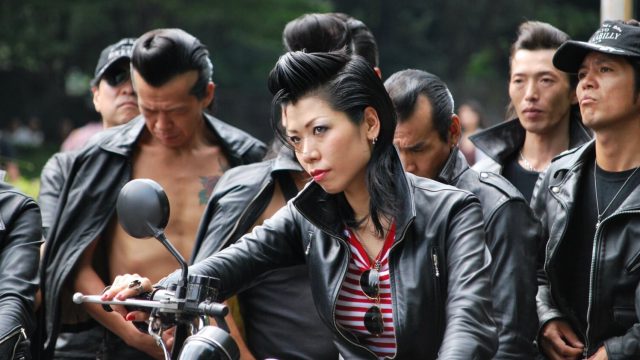 After that, the name was given by the police when the Bosozoku subculture started back in the ‘80s and it means “violent run tribe.”

The subculture started back in the ‘50s when kamikaze pilots came back from World War II. Used to follow a military discipline, the aircraft pilots didn’t manage to adapt to the new Mondaine lifestyle. They needed some form of excitement and danger so they could cope with the post-war lifestyle. And inspired by American western movies, the idea of a motorcycle club started to take life.

They used to take night rides. High-speed, high-noise, and high-risk rides, chased by police were their common form of adventure. The named they’ve used was kaminari zoku (thunder tribes) because of the loud noise the bikes made. The motorcycle gang included young riders and after that, the name was replaced with kaminari zoku or bōsōzoku as they are now named. The newly formed rider gang was a more tradition-focused group with members of almost all ages. They used to take control of the roads by blocking traffic, riding recklessly, lane splitting and simply being an intimidating presence.

Moving on to more modern times, they are a part of modern Japanese mythology, a subculture that includes a women-only badass biker girl gang. Nowadays, they also drive cars and the modified bikes feature custom exhaust systems which are very loud.

This is one of the rebellion acts they do, to disturb the peace. As mentioned before, they run red lights and wreck cars with their baseball bats. This looks like one biker girl gang nobody wants to mess with.

They are Japanese bikes like Yamaha, Kawasaki, Honda and Suzuki with a couple of modified parts. The front end features a very high fork and handlebars which are also very narrow to make it possible to ride through cars and escape any police cars chasing them. The fairings are very large, the exhaust systems very loud and the bikes are painted in flashy colours. Moreover, the fenders and fuel tanks are covered with kamikaze-style “rising sun” motifs and neon lights. The seat is also custom made and has a very long and upwards back design. The motorcycles are full of stickers and fitted with flags showing the gang’s symbol. 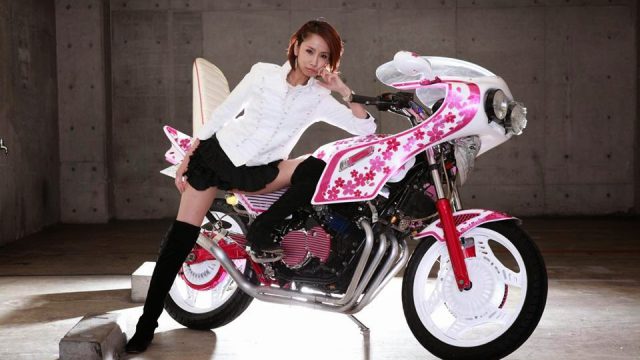 Bosozoku riders are known for their outlaw habits including starting fights with weapons such as wooden swords, baseball bats or Molotov cocktails. They ride in groups, the first bike is ridden by the leader of the gang who is responsible for all the member’s activities. They have strict rules, for example, it’s forbidden for the leader to be overtaken by another gang member. The police call the leaders Maru-Sō. 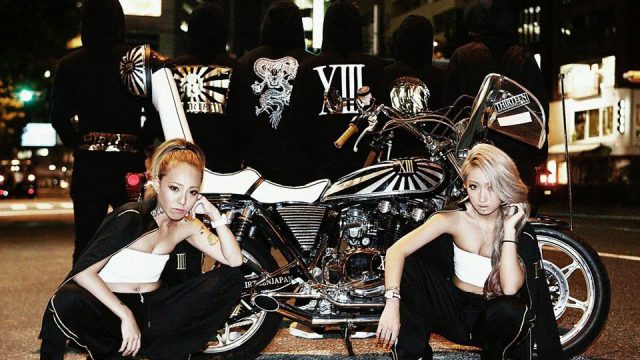 The group is composed of riders with ages between 16 and 20. After reaching their 20’s, the riders may become low ranking members of the yakuza. Most members came from the lower classes of Japan and by joining Bosozoku, they found a way to show their dissatisfaction with the law system and Japanese society in general.

In the ‘80s and ‘90’s they used to gather in large numbers and take highway rides. They never stopped and ignored any police attempts to detain them. Their biggest gatherings were on New Year’s Eve. The gang members used to smash the cars and threaten or beat up any motorists or bystanders who got in the way or expressed disapproval of their behaviour. And foreigners were their main target for their aggression. The number of the Bosozoku gang reached a top figure of 42,510 members back in ‘82. 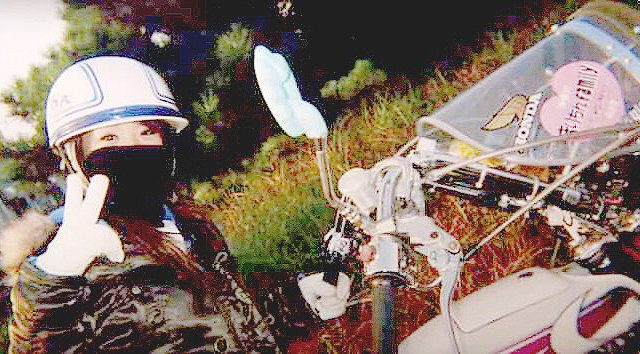 The way they dress influenced fashion over the years. Their looks were portrayed in Japanese anime, manga, and movies. The members wear a working jumpsuit or a tokkō-fuku (Special Attack Uniform). It’s very close to what the kamikaze pilots used to wear. 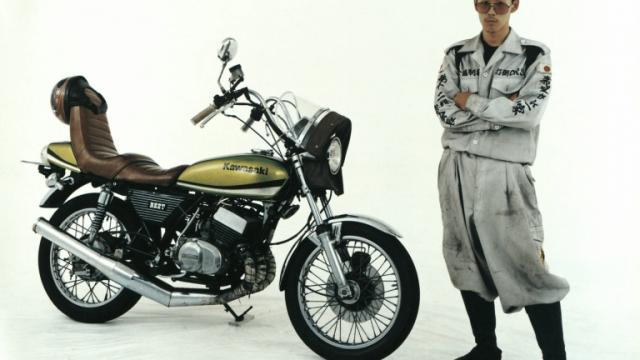 Another fashion style is a military overcoat with kanji slogans and embroidered club logos. It’s worn opened with just a bandaged torso underneath like a samurai. To keep close to the Japanese tradition, the leader's overcoat will be given from generation to generation year after year, and it’s not allowed to wash it, so after a time, it gets dirty. 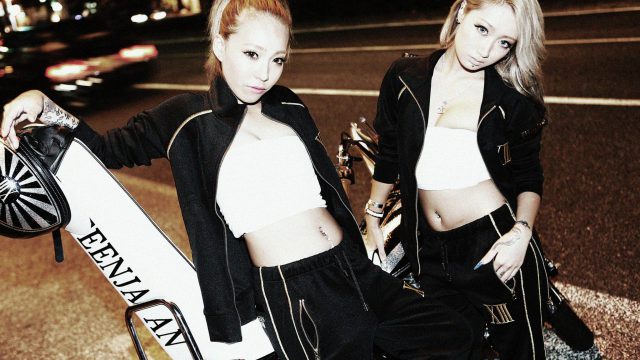 Other clothing items include baggy pants tucked inside tall boots and a tasuki which is a sash tied in an X around the torso – it was inspired by Japanese World War II fighter pilots. Some members would wear leather jackets and suits, headbands with battle slogans or rising sun emblem as well as surgical masks.

They pay attention to their hairstyle, namely pompadour or Danny Zuko style. The girl riders wear long, pointed, bright nails that match the bold designs of their bikes and they are covered in tattoos. 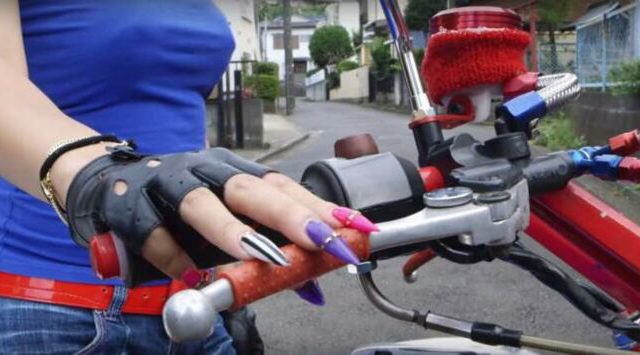 Back in 2004, with the new government road traffic laws enforced to allow the police to arrest and punish bikers riding recklessly in groups. So, seven years later, the Japanese National Police announced that the Bosozoku gang members fallen from 42,510 to 9,064 and the number of gangs from 507, down to 76.

The global economic recession made it hard for gang members to have sufficient money to customize their bikes. As a result, the lack of money made most members start riding scooters, wear helmets, stop wearing cool clothes and ride in smaller groups. Something very different from the good old days of the Bosozoku gang. 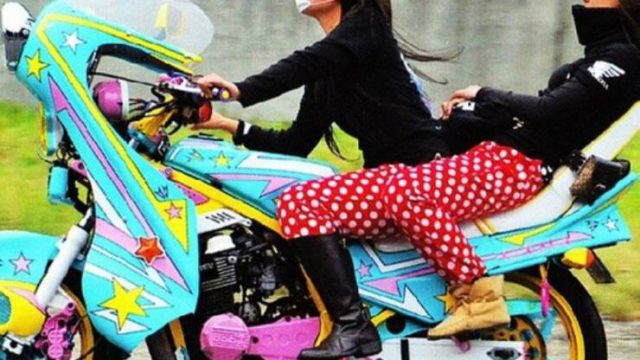 The strict laws enforced by police forces led to the Bosozoku Biker gang to become rather extinct, but rumour has it that the motorcycle club is making a comeback. Probably, not so aggressive as in the old days due to the tough new laws in Japan which make it difficult for the gangs to operate as they used to. 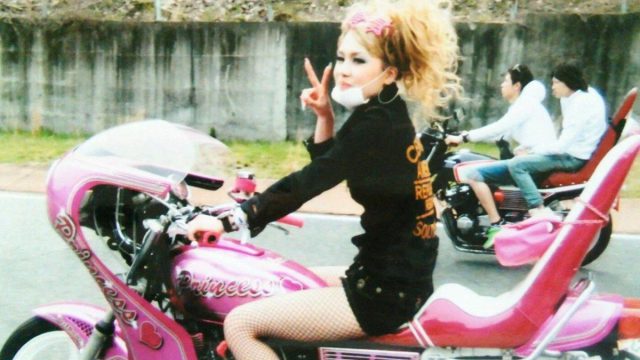