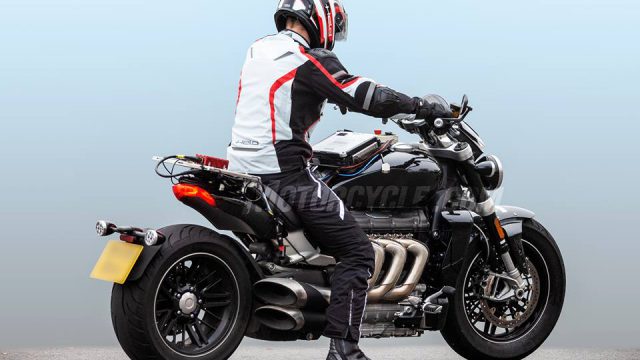 The news of an all-new Triumph Rocket went from rumor to reality as we just found out from a couple of spy-shots released by motorcycle.com a few days ago. The new Triumph Rocket III is a mighty behemoth that looks production ready and it screams “poweeer".

We all remember the Triumph Rocket III as the bike fitted with the biggest triple cylinder engine in the world that produced an impressive amount of torque. For the new model, Triumph will raise the displacement to around 2.5 litres and together with that, the power and torque will go over the roof. The previous model produced around 145hp and 200 Nm of torque from a 2.3-litre power plant.

Only by adding up the extra 200cc the new Rocket will boast around 180 hp and more than 230 Nm. Thanks to the electronics system that this new model will benefit from, the bike will become a lot safer and the entire amount of power can be used.

The older model was famous for pulling power wheelies, so imagine how the extra torque will kick in every time you pull the throttle. Luckily for us, a six-axis IMU will provide traction control, ABS cornering, anti-wheelie and all the latest electronics a modern bike can be fitted with.

We can already sport the LED lights on the front and rear, and we also get a glimpse at Triumph’s new TFT Connectivity system. There will be no shortage of comfort aids like heated grips and cruise control to allow the rider to enjoy the ride.

The major improvement look-wise of the new Rocket is the flowing lines complemented by the nasty looking tail unit. The beefy front end is an up-side-down fully adjustable suspension while the rear shock is hidden underneath the saddle.

The single-sided swingarm gives us a whole new perspective of the rear wheels and most important the three-one-three exhaust system brings up the maverick up of the engine. Unfortunately, from the spy-shots, we can’t see a passenger seat so the new rocket might be a solo-seater.