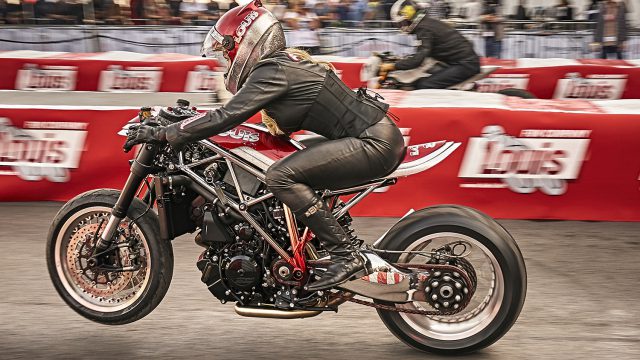 Louis manufactured this custom KTM bike to enhance its drag racing performance and make it more stylish. The motorcycle’s name is Caty M. Glam and it was redesigned to become a sprint race machine.

KTM calls its super naked ‘The Beast’ and when we think of this machine words like power, torque and hooligan pop in our minds. All that may be true, but the guys at Louis, one of Europe’s largest retailer of motorcycle clothing and accessories based in Hamburg, Germany had a different idea. They wanted to transform the 1290 Super Duke R into a stylish bike and make it a 1/8 mile race queen. So, Kay Blanke began to work on this project with help from Martin Struckmann and Detlef Stüdemann. Enter Caty M. Glam as this bike’s nicknamed.

The super naked was stripped down and the engine was repainted in different shades of black with silver-coloured screws to make it stand out. The stock rear subframe was replaced with a custom unit while the frame, subframe, and swingarm were chrome plated. The chroming process was used to help the bike withstand the torque twisting loads applied to the frame, thus enhancing the 1290 Super Duke R performance. The seat, tank and flyscreen were made from aluminium by Michael Naumann while Danny Schramm took care of the paint scheme.

Engine-wise, the 1300cc 75° V-Twin makes 180 hp and was upgraded by Stefan Trautmann from STParts with a new manifold while the exhaust system features a new set of mufflers from Shark. All these upgrades helped the KTM 1290 Super Duke R to deliver one hp at the tire per kg while 0-100kph (0-62mph) takes just two seconds.

The bike was re-wired to hides the main factory components behind the cowl and under the seat. Moreover, it was fitted with a Dynojet Power Commander and Autotune unit systems to increase performance. Other features include Gilles clip-on handlebars and Koso LED lights.

We know that KTM bikes are fitted with WP suspension, but for this project, Louis used racing components such as a Wilbers 46R fork and a Wilbers 642 shock on the rear. It was necessary to make suspension changes to help the bike keep the front wheel on the ground, thus the fork features a GP style potentiometer bolts which send back shock stroke data allowing tuner Ulf Penner to control wheelies better than relying on the wheel speed sensors alone.

The bike was raced by stuntwoman rider Mai-Lin Senf at the Glemseck 101 Festival in Stuttgart, Germany. It competed in the International Sprint, an eighth-mile drag race where Senf won the first round. Unfortunately, wheelie issues stopped the rider from winning more races.