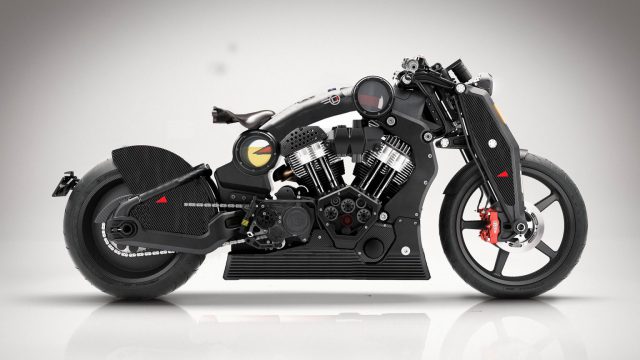 Three models will be built in the new Birmingham factory

The manufacturer came to a halt some years ago and almost had to close its doors, but things seem better now as there are set to enlarge their motorcycle range. So, the new bikes – Hellcat, Hellcat Speedster, and Wraith will complete their bike range and are designed at the new factory in Alabama.

The Hellcat and Hellcat Speedster are developed on a Harley-Davidson FXDR platform. Thus they feature the frame, suspension and Milwaukee-Eight 117 Screaming Eagle engine from Harley-Davidson. Engine-wise, the 1,920cc displacement unit delivers a claimed 124 lbs-ft (168 Nm) of torque and 93hp (70kW) @ 4,870 rpm. The Hellcat is fitted with a 3M carbon fibre fuel tank, front cowl, engine spoiler and Confederate CNC seat frame which is carved from solid billet blocks of military-grade aluminium.

On the other hand, the Hellcat Speedster is equipped with a fuel tank, swing-arm, front cowl, forks seat and rear end carved from solid billet blocks of military-grade aluminium.

Moreover, Confederate is planning to introduce the bikes on the European market as well. Of course, the prices are not so affordable as they vary from $45,000 bikes like the Hellcat to..wait for it..a $155,000 price tag for an FA-13 Combat Bomber model. Between the low range Hellcat and the high-end Combat Bomber, Confederate offers the Hellcat Speedster at a price tag of $75,000.

Confederate said the bikes are ready for delivery starting from July and at the moment, the company accepts preorders for the Wraith model with deliveries set to start next year.

Also, Confederate will continue to develop the F-117 Fighter, P-51 Combat Fighter and FA-13 Combat Bomber and with the newly redesigned models to the total lineup will reach six bikes. All existing models are fitted with the Confederate CX-4 frame, S&S X-Wedge 117 or 132 cubic inch engine, BST wheels, RaceTech suspension, Beringer Brakes, Motogadget electronics, a Bandit clutch while the frame is carved completely from solid billet blocks of aircraft-grade 6061 and 7075 aluminium built by 3D systems.