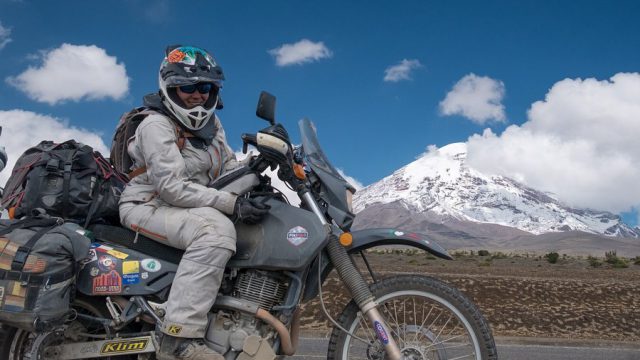 “These DR650s haven’t left us stranded of the last 80,000km exploring the Americas”

Michnus and Elsebie Olivier are a South African couple travelling the world on their Suzuki DR650's. Their latest adventure trip took them to South America. Due to travel restrictions, they are stuck in Sucre, Bolivia and plan to get back on the road as soon as the situation allows it.

Also known as Piki Piki Overland photography, Michnus and Elsebie have been on the road for over 7 years now. They are in South America since 2015 and plan to ride more through the dunes of Bolivia and later to the North of Brazil.

The adventure began in 2015 when they’ve travelled from Dilley Texas to Baja California and mainland Mexico. Back in 2017, it was time to ride Central America – Belize, Guatemala, El Salvador, Honduras, Nicaragua, Costa Rica, and Panama. After that adventure, the couple continued to ride through Colombia, Ecuador, Peru and Chile.

Their latest journey started back in 2017 when Michnus and Elsebie have ridden from State of Rio Grande do Sul region of Brazil, Porto Alegre to be exact, then ridden their Suzuki DR650’s through State of Santa Caterina, Paraguay, and at the moment they are in Bolivia.

According to an interview with Egle on the Road, the couple is in Sucre, Bolivia. Unfortunately, at the time being the boarders are closed with Argentina, Colombia, Ecuador and frankly the whole of South America. So, for now, the couple has to go to the local authorities and extend their visa and also the visa to keep their bikes on the current continent. The visa for people can be extended by 30 days and 90 days for the DR650’s.

The most interesting places

One awesome thing are the places Michnus and Elsebie rode through. The most interesting ones are a train cemetery in Uyuni, Bolivia or the Bolivian lagugas area.

"The town served in the past as a distribution hub for the trains carrying minerals on their way to the Pacific Ocean ports. The train lines were built by British engineers who arrived near the end of the 19th century and formed a sizable community in Uyuni," said Michnus and Elsebie.

“But these DR650s haven't left us stranded or not go on after a fall in all of the last 80,000km exploring the Americas,” said Michnus and Elsebie.

“And we weren't easy on them either. We rode as much dirt as possible and many tracks had us worried that the roads would just break the bikes being in such poor condition. There's just a different bond that evolves with a long term trip between a bike and owner that's different to other means of transport. They're part of the family,” added the couple.

“Southern Brazil, with a bit of research there is some pretty cool dirt to ride. Many leading to the most beautiful waterfalls and landscapes, which can keep you quite busy and even some great camping options,” concluded Michnus and Elsebie.

“Paraguay and this part of Bolivia are so flat the locals use it as an absolute measure for true level settings. We got greeted by the mutha of all rainstorms and the parts of the road that wasn’t washed away got flooded. Riding like this the entire way into Bolivia,” they concluded.

“Bolivia greeted us with massive rain flooding roads and destroying a part of the mountain pass we had to cross. Eventually later the next day we were able to get through and enjoy this amazing scenery while riding inland,” they said.

“Some dirt roads in Argentina are so long you can do a valve clearance adjustment while riding,” said Michnus and Elsebie.

Michnus and Elsebie like to ride with The lightest & most compact equipment available. This includes a simple set of clothes, dried food and enough water for riding up to two days. They like to limit their gear to 30 kg each.

Planning the trips is simple. Just calculating the general route and figure out if visas are required for the trip or any paperwork for the bikes.

Accommodation is based on sleeping in a tent, cheap hostels, or CouchSurfing, House Swap and similar websites if needed.

The Suzuki DR650 was modified to transform the adventure bike into a worldwide travel machine. It’s fitted with an Acerbis 26-litre fuel tank and handguards, plus Warp9 brake and clutch levers.

Suspension wise, Michnus and Elsebie upgraded the front and rear end and mounted shocks from Cogent. The wheel bearings were replaced also. Other features include Sargent seats to increase the comfort level for long trips which may include 500km-700km per day. The standard exhaust system was too heavy (5kg) and one bike was fitted with a Suzuki GSXR1000 exhaust adaptation while the other one equipped with a South African aftermarket exhaust. Thus saving 2.5 kg and slightly increased low and midrange power.

The riding position was upgraded with JNS Engineering lower pegs mounts which have a 38mm drop and 25mm set back to make the footing position better. Furthermore, the DR650’s have Zumo 660 GPS’s fitted onto the bars with RAM mounts and Touratech GPS bracket.

Luggage wise, the couple fitted lightweight frames on the bikes to support the ATG soft luggage.

It’s great to see such commitment and we hope to see Michnus and Elsebie back on the road for more adventure trips through South America.

You can view a full photo gallery by clicking on the main photo in the story.