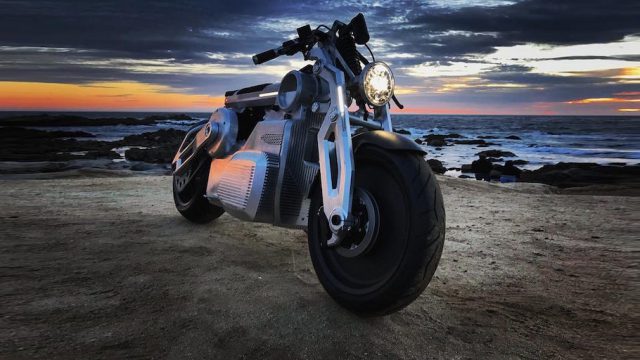 Enter Zeus, an all-new electric motorcycle prototype from Curtiss Motorcycles. Zeus is so much more than yet another e-motorcycle, as it brings together a striking architecture, twin motors and crazy specs.

Even though the name of Glenn Curtiss may be unknown to many riders, his engineering genius left us with the iconic v-twin engine so many motorbikes have been using for more than a hundred years. More than a century after his 1903 invention, a company that bears his name honors his engineering prowess with a motorcycle that turns heads and leaves people awestruck.

Jordan Cornille, director of design at Curtiss, speaks about Zeus in admiration, stressing out that the pivotal idea behind this bike was to benefit from the freedom electric bikes offer. In the absence of the bulky engine and fuel tank, motorcycle designers have quite a lot of freedom, he says, and that freedom was used to the max in the case of Zeus.

Cornille opted for a CNC machined frame and swingarm, but chose bolting over welding, for a more radical look. The dual motor array sits under the rear section of the flat seat, with plenty of negative space in front of it, to help with the air cooling.

The massive swingarm is linked to the frame by means of a cantilever single-shock rear suspension, complemented by an equally imposing girder fork in the front. The batteries are located underneath the bike in their machined aluminum casing, providing a low, centralized mass for better stability.

Curtiss Zeus is powered by two motors supplied by Zero Motorcycles, and this probably makes it the first e-twin in the industry, if the term appeals to you. Together, the two Zero units combine to a whopping 170 hp, with the torque figure being an impressive 393 Nm for blistering acceleration.

The battery pack can hold 14.4 kWh at the moment, but Cornille says that the battery specs are expected to improve as the bikes approaches the production phase. As generous as this battery may seem when compared to what most electric motorcycles can boast on, it could drain quite fast when riding the Zeus hard.

Production is scheduled to start in 2019, as 2020 should already bring the first Zeus units that are available to customers. Cornille adds that Curtiss’ long-term plans include more “models that will fit every genre and pocket.” Honestly, we just can’t wait to see more e-machines arriving from Curtiss Motorcycles as they seem to bring something that’s truly fresh in the industry!