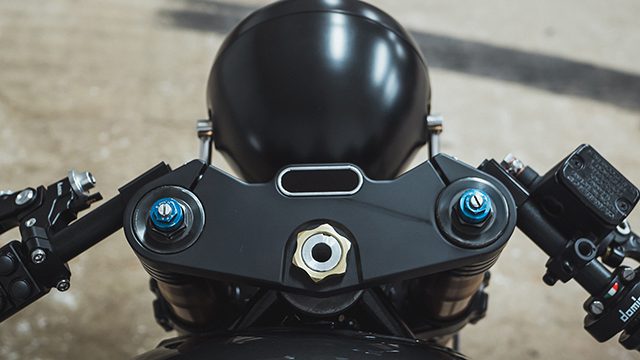 Called Project K, the bike was developed by Tommo and Dav of Spitfire Speed Shop based in the UK. Built into a minimalist café racer, this custom BMW wears a Porsche 911 paint scheme and has a 987cc engine good enough for a top speed of 137 mph.

To begin this project, the motorcycle was stripped down of all its components. Spitfire Speed Shop added the front end from a Suzuki GSX-R1000 to improve handling, Tokico twin disc brakes, a new subframe and a custom tail to name a few. The bike features a YSS adjustable shock fitted horizontally to the swingarm to deliver a pushrod-like suspension similar to those used in race cars.
A diamond-stitched seat was fitted and to make the BMW K100 cafe racer shine it was painted with a powder-coated colour scheme resembling a Porsche 911.

Beneath all that glam we find a 987cc inline-four engine with a couple of tweaks. The original airbox and fuel injection are gone and Spitfire Speed Shop equipped Keihin side-draft carbs with custom made intake manifolds, a Domino throttle with universal cables and four air pods. Completing the package, the K100 Project K has chrome filters and a cut exhaust. There are no tech details regarding any power out figures, so probably the delivery is still 61.7Kw (84hp).

The ECU for the fueling was ditched and Tommo and Dav decided to keep the Bosch ignition side and hide all the wiring in a custom-crafted box under the seat. To keep a classic look, the original fuel tank was restored.

The BMW K100 Project K was built to be shown as a Pro-Build at the 2020 BikeShed show and unfortunately, the event was cancelled due to the current lockdown. All in all, we have to say the bike looks awesome.