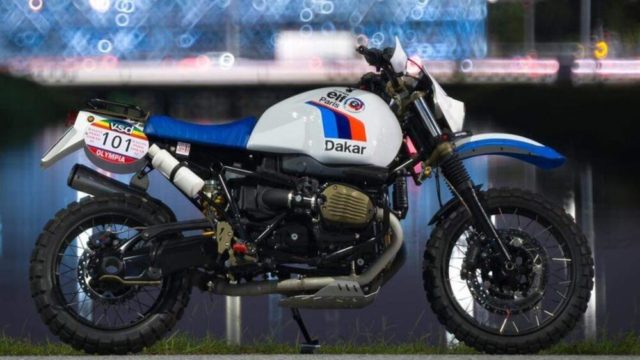 This custom BMW motorcycle was built by a former Enduro rider, Ek Chalermphol in his workshop. The focus was put on making the bike look like a vintage Dakar Rally machine. It features a lot of custom parts which makes the motorcycle look similar to the first GS model of the ’80s – the legendary four-time Dakar Rally winning BMW R80G/S.

Some of you may remember the Paris Dakar races of the ’80s and how BMW won four times with the R80G/S which was the starting point to develop the GS models we see today. As hard to believe as it may be, this custom BMW RnineT Urban G/S was manufactured in Bangkok, Thailand, by Ek Chalermphol in his motorcycle shop.

Ek is a former Enduro rider and he started building this project using a standard BMW RnineT Urban G/S model and he managed to convert the bike into a Dakar Rally looking motorcycle with all the bits and bolts. The bodywork received a complete makeover with a new maxi nylon fuel tank and seat covers which were provided by Unit Garage in Rimini. The front fender looks similar to the Ufo Plast and to make the motorcycle worthy of looking like an ’80s Dakar Rally machine, the rear fender and licence plate holder come from an old enduro bike. The headlight holder is also vintage, but the headlight itself is modern and features LED lighting. The small luggage rack is from Wunderlich while the bottle on the right of the saddle is an old Acerbis. To make the motorcycle have even a more Paris Dakar Rally appeal, a pair of Dakar replica tables, with the number 101, were fitted on each side of the rear fender.

The engine features new valve covers and a couple of parts with a copper ceramic finish. Also, a white ceramic coating was used for the  exhaust manifolds while the silencer is an American SuperTrapp.