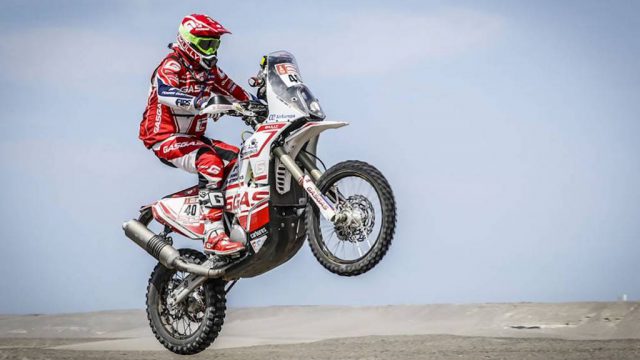 With a 508km liaison and 226km timed special day five of 2018 Dakar was one of the most demanding rounds so far. Today’s stage was dominated by  Honda rider Joan Barreda Bort. After starting ninth in the morning, he managed to cross the finish line with 10m 26s ahead of KTM rider Matthias Walkner.

The spanish ride Joan Barreda was determined to regain lead today. After a navigation problem during day three, he fought his way back to the top. Barreda is currently in the fourth position overall but, he is still on the hunt for the Dakar 2018 podium.

It was a good day in the end. "I set a blistering pace throughout the stage and it worked. I knew it was the last day on the dunes, so I had to attack. That's exactly what I did, and I gained back some time. I'm back in the top 10 and, although the deficit is still big, I'm sure I'll find an opening.

The overall leader Adrien van Beveren although in the front platoon during today’s special couldn't repeat stage four performance. He encountered a few problems with the sand that delayed his arrival, 14m 35s behind leading Barreda.

I'm happy to be done for today because it was tough… and I'm delighted with having left the other guys behind. I attacked towards the end of the first special because I knew I could press the advantage in the second one, especially with the tracks left by the cars. My little Yamaha carried me through to the end although it was tough… I'd never seen sand so loose before. There was a moment when I had to pedal with my legs to get over a dune. It was an amazing special. Getting here first after spending the entire stage up front is an awesome performance in my book, even if the guys behind probably gained some time on me.